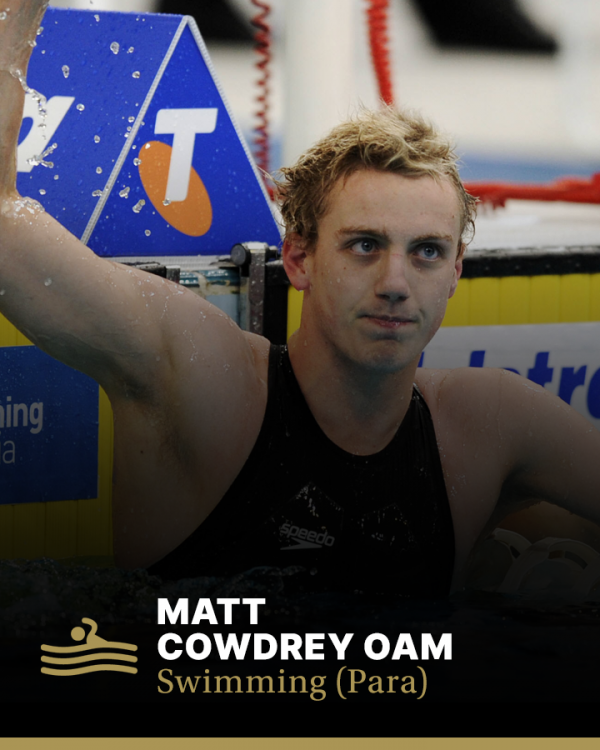 Matthew Cowdrey OAM was inducted into the Sport Australia Hall of Fame in 2019 as an Athlete Member for his contribution to the sport of swimming.

Introduced to the sport at the Norwood Swimming Club in Adelaide, Cowdrey began swimming at the age of five and by 11 he had broken his first Australian open record and his first world record by 13. He then embarked on his senior professional career by competing at his first Paralympics in Athens in 2004 at age 15. There, he won three gold (100m Individual Medley S9, 200m Individual Medley S9 and the Men’s 4x100m Medley Relay), two silvers and a bronze medal.

He continued his stellar form into the 2012 Paralympics in London, winning a medal in every event -five gold (100m backstroke S9, 50m Freestyle S9, 100m Freestyle S9, 200m Individual Medley SM9 and the 4x100m Medley Relay), two silver and one bronze -and clearly identifying himself as Australia’s greatest ever Paralympian.

In 2012 he became Australia’s most successful Paralympian winning a total of 23 Paralympic medals, including 13 gold across the 2004, 2008 and 2012 Paralympic Games.

When he retired in February 2015, Cowdrey said: “I have been fortunate to have achieved more than I could ever have dreamed of, and more than I set out to achieve, and more importantly I have enjoyed every minute of my time on the Australian swim team.” Glenn Tasker, then President of the Australian Paralympic Committee described him as one of the greats of Paralympic sport noting he had become an outstanding ambassador for the Paralympic movement.

Cowdrey also won the Commonwealth Sports Award for Male Athlete with a Disability, was selected in Swimming Australia’s All-Star team in 2006 and 2007 and Swimming World magazine named him world Swimmer of the Year with a Disability in 2007, 2008 and 2012. He was selected as Australia’s Closing Ceremony Flag Bearer at the 2008 Paralympic Games, named Young South Australian of the Year in 2009 and inducted into the Australian Institute of Sport’s “Best of the Best” in 2011.

The South Australian Aquatic and Leisure Centre named its main competition pool after him, the Sydney Olympic Park Aquatic Centre inducted him into the Path of Champions, and he is an inductee of the Swimming South Australia Hall of Fame.

In 2005 Matthew Cowdrey was awarded a Medal of the Order of Australia for service to sport as a gold medallist at the Athens 2004 Paralympic Games.