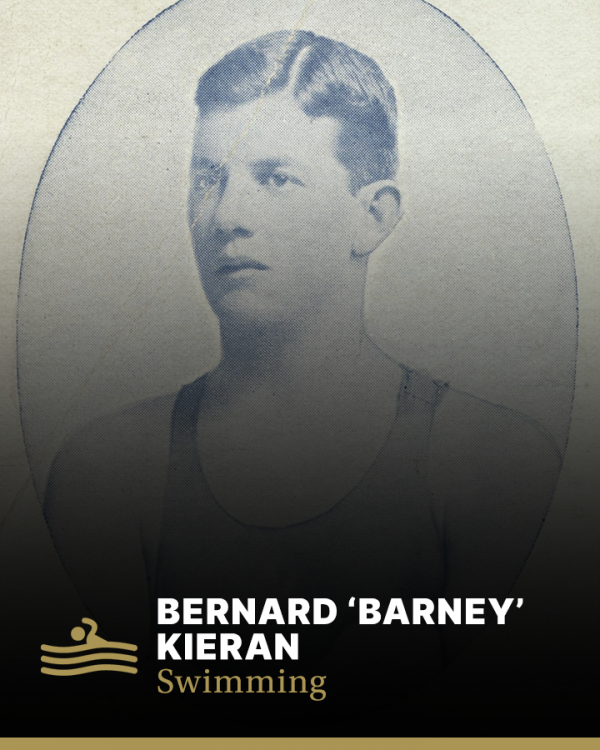 Barney Kieran is one of the forgotten, outstanding and tragic figures of early Australian swimming history; one of a group of champions who established Australia in the early days of the century as a notable nation in swimming.

At the peak of his career (which spanned less than two years), Kieran was unchallenged as the fastest man in the world over all distances from 220yds to the mile.

His formative years were spent literally surrounded by water as a cadet on the New South Wales training ship ‘Sobraon’. He was at first self-taught, ‘training’ by diving overboard and swimming casually around Sydney Harbour. Later, the former Australian champion R R Craig coached him. He was extremely successful over 220yds, but specialised in distance events.

Kieran, burst into prominence in 1904, and at just 17, he showed such speed that he was matched with the great Dick Cavill over the 220yds. Cavill, then the world’s leading swimmer, won by a touch. The pair met again later that year over 880yds and Kieran won.

Kieran won every Australian title from 220yds to a half mile at the beginning of 1905 and then went to England. Managed by Hilton Mitchell, after months on a ship and far out of shape, the 18 year old Australian beat the best swimmers in Europe, setting eight world records, however only one was accepted in the record books (the 500yds). In a race for the championship of the Mersey River Liverpool, he won by 300yds.

In 1905, Kieran recorded four times which were easily the best in the world and in one case stood for 19 years. But in that era, it was near impossible to have times that were recorded in Australia accepted by other countries and Kieran was credited with only one -6min 02.7secs for 500yds freestyle set in England. The International Swimming Federation (FINA) (constituted in 1908), in retrospect recognised this record. Many of his times had been established from the scratch mark in handicap races.

Not until the early 1920s, did swimmers anywhere in the world approach Kieran’s times in an era when few knew anything about conditioning and training. Sports medicine was unknown.

Sadly, Kieran never contested an Olympic Games. Back in Australia, he won the Australian 220yds, 440yds and 880yds titles early in 1906 and seemed to be shaping as a stand-out prospect for the 1908 Olympic Games. He became ill on the third day of the titles and was rushed to hospital almost immediately after winning the 880yds. He had acute appendicitis, was operated on, and died three days later aged only 19.

His best opportunity would have been in St Lois in 1904, but that year Australia ignored the competition and only one Australian -Corrie Gardner -paid his own way to the Games and represented Australia. Kieran probably would have won at least two gold medals. Had he lived to swim in the 1908 London and 1912 Stockholm Olympics, there is little doubt he would have won more swimming gold medals than any Olympian before or since.

He was honoured in the International Swimming Hall of Fame in 1969.