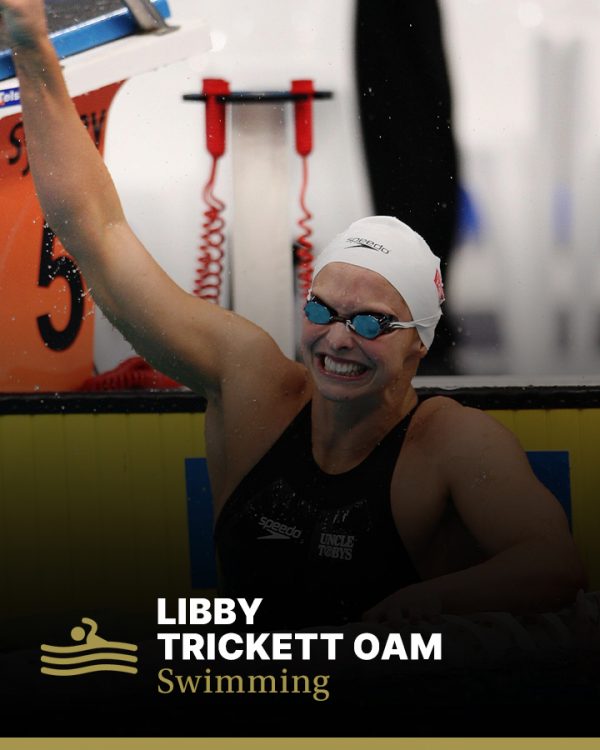 Libby Trickett OAM was inducted into the Sport Australia Hall of Fame in 2016 as an Athlete Member for her contribution to the sport of Swimming.

Trickett burst onto the Australian and world swimming scene in 2003 when she not only won her first national title, but broke the standing Australian 50m freestyle record. Later that year she become the first Australian woman to break the 25-second barrier for the same event, before she won the first of many international medals with two bronze at the World Championships in Barcelona.

The following year, at the Athens Olympic Games she captured the first Olympic gold of her career as part of the Australian team that set a new world record in the 4x100m freestyle. It was Australia’s first female Olympic relay victory in the pool since Melbourne in 1956. She went into the 100m freestyle as the world record holder, but missed the final before winning bronze in the 50m freestyle.

At the 2005 world championships she won a debut individual world title in the 50m freestyle, whilst also collecting two relay gold medals (4x100m freestyle and 4x100m medley) along with silver in the 100m butterfly and 4x200m freestyle.

Trickett shone at the Commonwealth Games in Melbourne in 2006 where she won five gold medals – with victories in the 50m and 100m freestyle and all three relays, including a world record 4x100m freestyle swim where her own split lowered the world record. She went on to win five of Australia’s 12 gold medals in the 2006 world short course titles in Shanghai, earning her the female swimmer of the meet.

Melbourne was a happy hunting ground – at the 2007 world titles at Rod Laver Arena she replicated the Commonwealth Games feat by snagging another five gold medals.

In Beijing, she claimed her first individual Olympic gold medal – in the 100m butterfly – and then combined with Emily Seebohm, fellow SAHOF Member Leisel Jones and Jessica Schipper to win the 4x100m medley relay gold in world record time. She went in as world record holder in the 100m freestyle but was out touched for the gold medal after scrapping into the final. She came away from the Beijing Games with two gold, a silver and a bronze medal.

At the Olympic Games in London in 2012, Trickett swam the heats of the 4x100m freestyle. With the Australian team going on to win the gold medal in the final she won the fourth Olympic gold medal of her career.

Trickett retired, for the final time in 2013.