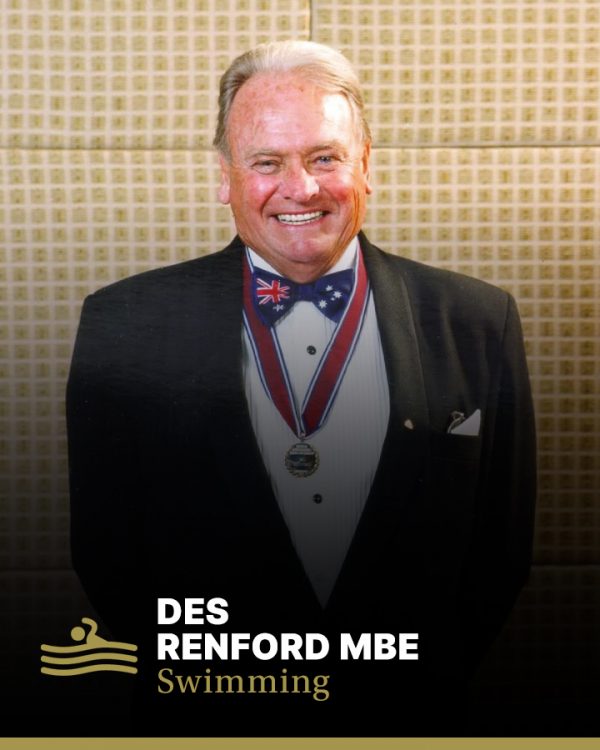 In 1937 Des won the 55yds swimming championship and regularly competed in short events after that. He joined the Royal Australian Navy at 16 years of age and saw service aboard the mine layer ‘HMAS Bungaree’ in the South West Pacific and later aboard cruiser ‘HMAS Hobart’ in Japan, attached to the British Commonwealth Occupation Force.

In 1954 he was decorated for his part in the rescue of three fishermen in shark infested waters.

Des turned professional in 1967. The following year, he finished third in the 40km marathon race across Port Phillip Bay, Victoria, and he won his first marathon on the Murray River in 1969 over 65kms.

In 1970, he swam 50 laps of Bondi Beach (approx 45km) and was selected as one of the top ten marathon swimmers in the world that same year. He then became the first Australian to cross the English Channel from England to France. He went on to make 19 crossings of the Channel in as many attempts.

In 1970 Des competed on the World Marathon Swimming Circuit in Canada and the USA. En route back to Australia he swam from Marine Park, San Francisco, around Alcatraz and back, and in doing so took over 22 minutes off the existing record.

He won the 37km Moreton Bay (Shorncliffe to Tangalooma) race in 1973, and in 1974 he swam 93km from Watson’s Bay Sydney Harbour to North Wollongong Harbour in 27 hours 29 minutes (which in 1974 was the world’s longest unassisted swim).

In 1975 he swam the Channel three times in four weeks, a feat never achieved before and was awarded the Matthew Webb medal (Matthew Webb was the first swimmer to conquer the English Channel and did so on the day Des was born). In 1975 Des took over the ‘King of the Channel’ title from Great Britain’s Mervyn Sharpe and held the title until 1980. In 1975, 1979, and 1980 Des swam across the Channel three times each season.

He was a member of the first All Australian Cross Channel Relay Team in 1991 (aged 64) and in 1993 he was manager and tactician to the Sunrice Australia Channel Relay Team who astounded the swimming world when they swam the ‘old ditch’ four ways non stop in 43 hours and 7 minutes. In doing so, they broke four world records.

Renford produced five movies including the sports documentary ‘King of the Channel’ (1976), which won a Logie award.

He became a Member of the Order of the British Empire (MBE) in 1976 and received the Order of the Insignia of the Holy Cross (OHC), a papal knighthood from His Holiness, Pope John Paul II in July 1990.