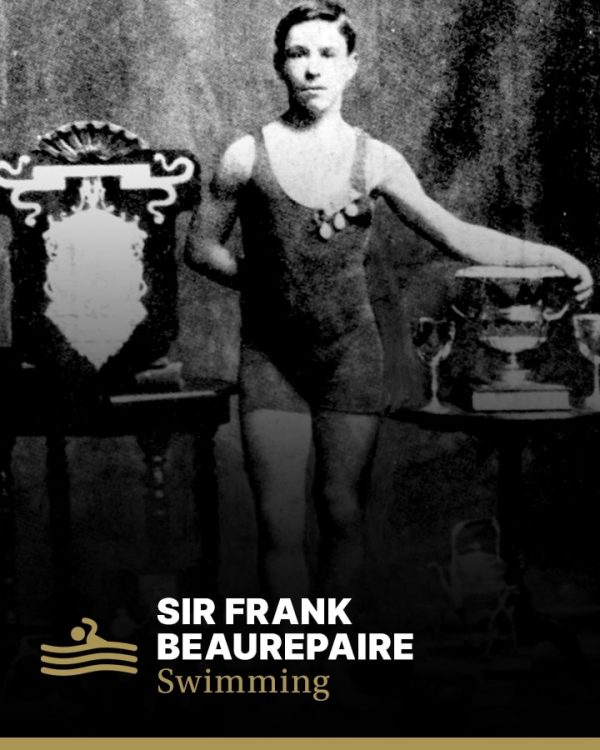 Just as with the Cavill Family, Barney Kieran, Fanny Durack, Annette Kellerman, Freddy Lane in the early 1900s, Beaurepaire was part of Australia’s leading export – swimmers. Three different times, “Bogey” was invalided by sickness and told he would never be able to participate in sports again. Each time he swam his way back to health and to world records.

In a competitive career lasting from 1903 to 1924, Frank Beaurepaire’s swimming career spanned five Olympics. He competed in three, London (1908), Antwerp (1920) and Paris (1924) and while he did not win a gold medal, he did win three silver and three bronze medals.

Beaurepaire learned to swim the hard way, being tossed into the tidal water at Stubbs Baths, South Melbourne, by his father, at the age of six with a rope knotted around his middle. He suffered a sever bout of rheumatic fever at the age of ten, but persevered with his swimming, winning Victorian titles over 220yds and 440yds at the age of 14. The following year he added to those championships the half mile and mile. He was chosen to swim in the Australian championships in Perth in 1907, with the stipulation from the impoverished Victorian Amateur Swimming Association that he travel on the steamship on a child’s fare. Nearly 17 at the time, he wore short pants and a schoolboy cap when he presented himself to the ticket counter, bending his knees to reinforce the deception. He paid half the price for the boat fare, then won the 440yds, half mile, and mile titles to earn his trip to the Olympic Games.

At 17, he sailed from Australia to London with just £16 in his wallet. Trying to manage his own preparation, he failed to strike form. Rather than pay full entrance fees at the public baths, he trained in the very cold water at Highgate Pond, where no distances were marked. He entered a 15 mile swim in the Thames, after living on a diet of mainly bread, cheese, and ginger beer, and collapsed after 6 miles. A week later, his fortunes changed. He won the English half mile championship at Bradford, Yorkshire, in water so cold that he fainted after the race. After that swim, he asked officials to turn up the heat when he raced at Nottingham for the 220y title. They did, to such a degree that the spectators couldn’t see the swimmers for steam. Frank won easily.

He contracted a heavy cold just before the Olympics, and swam well below his best. He won silver in the 400m and bronze in the 1500m. He also swam in the 4x200m with ‘Snowy’ Baker, Theo Tartakover, and Frank Springfield. They won their heat and finished fourth in the final.

In 1910, Beaurepaire won four more Australian titles. Then at the age of 19, headed for Europe and the most successful season of his career. Although essentially a middle distance swimmer, he won seven English championships over distances from 100yds to a mile, six of them in record time. He was undefeated in 41 championship and first class races during the entire European tour, setting world records for 300yds and for the 200m, 300m, and 500m.

In Helsinki, Finish officials put more pressure on him, he was set the task of swimming 500m against Finland’s five fastest sprinters, each of whom swam just 100m. Even though the virtual relay squad had the benefit of diving starts for each 100m leg, he won the race by 11 seconds. After that tour, the Helms Athletic Foundation of America awarded Beaurepaire its trophy as Australia’s sportsman of the year.

It seemed that he would sweep all before him at the 1912 Olympics in Stockholm, but unfortunately he became a victim of swimming officialdom when he lost his amateur status in 1911. His status had first been queried when, on his return from his triumphant 1910 tour, the Victorian parliament made him a grant of £250 in recognition of his ‘publicity value to Victoria’. The argument was not pursued officially, but in 1912 Beaurepaire took another risk when he accepted a £3 a week job on the physical culture staff of the Victorian Education Department. The NSWASA refused to allow its swimmers to compete against him, on the grounds that he had infringed his amateur status. He was disqualified from one race in Brighton, Victoria, even as he lined up on the starting blocks. Eventually the case went to the International Swimming Federation, which suspended Beaurepaire from competitive swimming, effectively ruling him out of contention for the 1912 Olympics.

Although reinstated in 1920, he could not swim at the 1916 Berlin Games because they were cancelled due to the Great War. After being rejected by the AIF as medically unfit, he served with the YMCA during the War as a field officer in Egypt and France, where he was badly gassed.

After the war, Beaurepaire made a comeback, and in 1920 at the Antwerp Games won another silver and bronze medal, this time in the 4x200m relay and the 1500m respectively. Beaurepaire had to be dragged from the water after the 1500m due to the freezing water (10ºc). He was kept out of the water for the heat of the 4x200m relay, then resumed his place on the team for the final, but the Australians were well beaten into second place by the Americans. Beaurepaire’s sister, Lily, also won selection in the 1920 swim team as a sprinter. Together they became the first Australian brother and sister to compete at the Olympics.

In February 1922, Beaurepaire swam to the rescue of a young life saver who was attacked by a shark at Coogee Beach. Beaurepaire and another swimmer, Jack Chalmers, went out to help the stricken swimmer, Milton Coughlan, who had been lifted out of the water as the shark attacked. Chalmers actually wrestled Coughlan from the shark’s jaws, and he and Beaurepaire brought the shockingly mauled victim 60m back to land. Coughlan died soon after and Beaurepaire and Chalmers were both awarded the Royal Humane Society’s highest honours. A public fund was opened to reward their bravery, and from it Beaurepaire received £500. Frank put the money toward founding his first Beaurepaires tyre service in Melbourne. His studious enterprise, thoroughness, and persistence, all characteristics of his swimming, got him through the Great Depression.

Beaurepaire continued on and, at the age of 33 at the 1924 Paris Games, won silver in the 4x200m relay to the Americans who won in world record time, with Sweden third. He also took bronze in the 1500m to fellow Australian Boy Charlton who won gold.

Beaurepaire was knighted in 1940, and became Lord Mayor of Melbourne, the guiding genius of the 1956 Olympic Games. Tragically he died only months before the games were held.

In 1967, Beaurepaire was inducted into the International Swimming Hall of Fame, in Fort Lauderdale, USA.