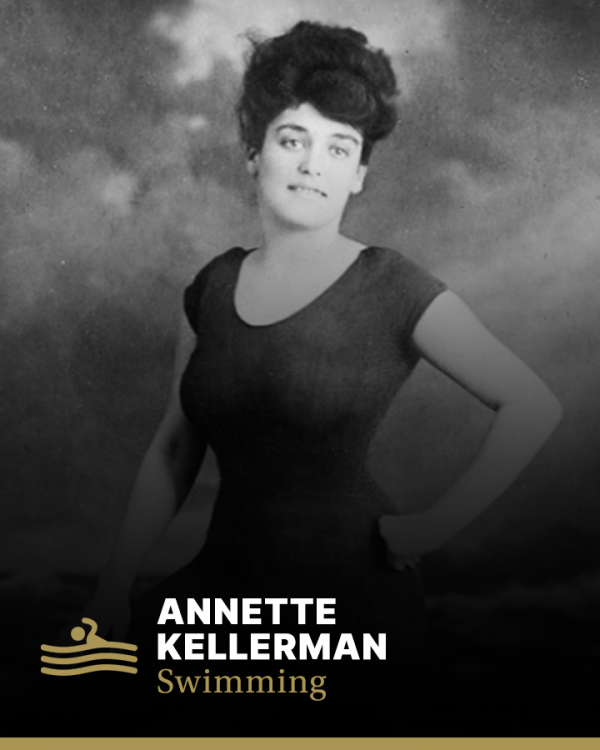 Annette Kellerman, the woman who was to become internationally known as swimming’s first “Aqua Queen”, was born in Marrickville, New South Wales, in 1887, the daughter of two professional musicians. She high-kicked her way though the social barriers of the Victorian era, paving the way for women to compete in Australian and international sport. Annette, along with fellow Australians Fanny Durack and Mina Wylie did more to popularise swimming (especially for women) than any other people in the early years.

In her youth Annette was a puny, sickly child who contracted polio, leaving her with iron braces on her legs.

Her mother took her to the famous Cavill Baths to take swimming lessons and by the age of 15, she swam her way out of steel braces and into good health. “Only a cripple can understand the intense joy that I experienced when little by little I found that my legs were growing stronger and taking on the normal shape and powers with which the legs of other youngsters were endowed.”

“But for swimming, I might have been hobbling about on crutches today (1918) instead of skating, dancing, and indulging in 25 mile constitutionals in addition to making my regular livelihood as a moving picture mermaid, or flirting with ‘Toto, the funny fish,’ through the walls of the glass tank at the New York Hippodrome.”

She learnt the trudgen stroke, the “freestyle of the day” from her mentor, the famous Olympic champion, Freddie Lane, and Annette soon logged up a succession of victories.

She won her first state title, the 100yds in 1min 18 seconds, then set a women’s world record for the mile with 32min 29 seconds, a time which she subsequently lowered to 28 minutes. Her first distance swim was 10 miles in Melbourne’s Yarra River. She set records in the Yarra at 2.5 miles (46 minutes) and 5 miles (downriver) at an average of 21 minutes a mile. Her first public diving display was from the 50 foot high board at Cavills Bath in Sydney.

After her world mark, the family held a conference and it was decided the young champion would become one of the world’s first professional female swimmers.

Annette signed a contract with the Melbourne Aquarium to perform a daily mermaid show for the sum of £5 a week. Her show was performed in a 20m glass tank, which she shared with eels and other fish.

Following her Melbourne performances, the “Aqua Queen” moved on to other state capitals and in 1904 and at the age of 17, her father decided to take ‘the show’ to England for “more people, more theaters and more money to be earned by professional swimmers.”

Annette’s father, who appeared to be quite an entrepreneur, realised a publicity stunt was required to lift the profile of the woman he now called the ‘Water Venus’.

He hired a boat and they rowed out into the middle of the River Thames. There, the young swimmer dived over the side and proceeded to swim down the river from Putney Bridge to Blackwall, a distance of some 27km.

Fred Kellerman was decked out in his habitual attire, which comprised a frock coat and a top hat. As they proceeded down the Thames, crowds flocked to the river banks. By the time they reached Blackwall, thousands had gathered at the dock. The publicity stunt had been successful!

Annette’s marathon swim had come to the attention of Lord Northcliffe, the newspaper magnate, and he contracted her to swim the English Channel. The trade off would be Northcliffe’s Daily Mail would have exclusive coverage. The contract stated the Kellermans would receive all expenses and a variable fee for the actual swim.

Six male rivals were signed up to join the young Australian in her attempt to swim the Channel starting on the English side. Huge crowds lined the shores as the small contingent set off.

Annette never quite made it across the Channel, but her 10.5 hours, three quarters of the way across was a women’s record that held for many years. On her first Channel attempt she was violently seasick and lasted just under seven hours but attracted a great deal of sympathy for her pluck and determination. Annette lasted longer than any of her male companions and for her effort she received £60.

After the first Channel effort, Annette was inundated with professional offers and she became a celebrity. She was even invited to swim for the Prince of Wales (later George V) at the exclusive Bath Club.

The Channel was to beat Annette on two more occasions. However for her three attempts she was recognised as the greatest female distance swimmer in the world.

After her ill-fated Channel swims, Annette tried and won a seven mile ‘Seine Swim through Paris’ beating 16 men. This swim drew half a million spectators, the largest live audience ever to see a swim race. Before she retired from competitive swimming Annette challenged and beat Baroness Isa Cescu, the best known Austrian swimmer, in a 22 mile Danube River Race from Tuln to Vienna.

Having conquered all the swimmers and most of the rivers of Australia and Europe, Annette travelled to the United States where she specialised in water feats as a high diving and stunt swimming artiste. After long runs in Chicago and Boston, she was signed by the Keith Circuit doing her ‘first time ever’ diving act on stage every day for two years (14 shows a week). When imitators threatened her $1250 a week contract, Annette moved on to Hollywood, where her first movie, ‘Neptune’s Daughter’, cost $35,000 to make and grossed $1,000,000. In each of her succeeding movies the public expected new stunts. After five movies, Annette returned to the New York Hippodrome with “the biggest mermaid spectacle ever seen live or on the stage.”

At the height of her popularity, Annette was arrested on a Boston beach for indecency – she was wearing one of her fitted one-piece costumes.

The resulting newspaper headlines and outpouring of public indignation were a death-knell for Victorian attitudes towards women’s swimwear. In later years, she travelled across the United States and Europe promoting fitness and a healthy lifestyle. In 1918, she wrote a book, titled ‘Physical Beauty and How To Keep It’.

Annette starred in motion pictures such as the ‘Diving Venus’, ‘Queen of the Mermaids’, ‘A Daughter of the Gods’, and ‘Neptune’s Daughter’. She crisscrossed the US and circled the world in the famed ‘Annette Kellerman black one-piece suit’ which made swimming attractive to men and liberated for women. She performed stunts and dives which made her first among the fore-runners to synchronized swimming and women’s high diving. In ‘Neptune’s Daughter’, she set a world high diving record of 28 metres. In the next film, ‘Daughter of the Gods’, Annette again had to dive but this time it was only 18 metres. However, the pool she dived into was full of alligators.

In 1910 Annette married her press agent James Sullivan and he took over as her manager. By the 1920s Annette was still touring and performing but she gradually involved herself with other enterprises. She ran a health food shop in Los Angeles and went onto the lecture circuit.

During the Second World War, Annette came back to Australia and worked for the Red Cross in Queensland and, returning to her old show business roots, entertained troops stationed in the state.

In 1961, Annette and her husband retired to the Gold Coast. She continued to swim daily and keep fit well into her later life. She claimed that her greatest success was in helping free female swimmers from the cumbersome Victorian neck-to-knee costume.

She was inducted into the International Swimming Hall of Fame in 1974.