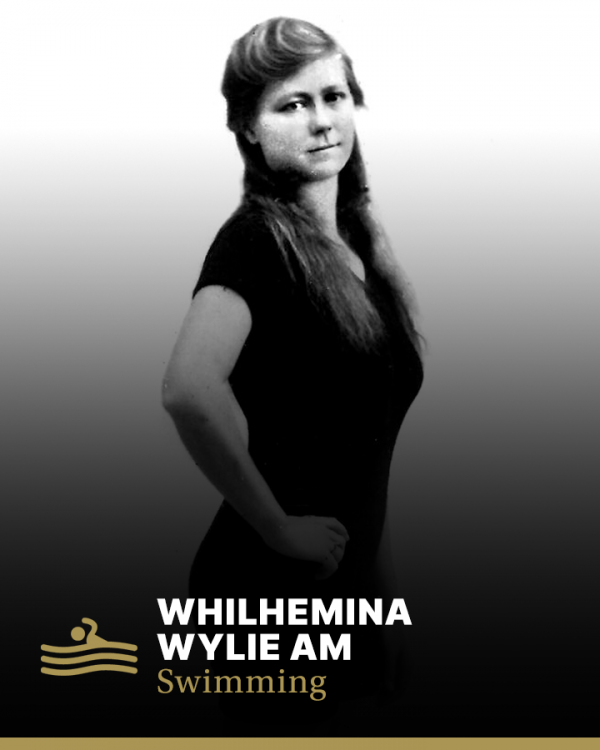 Mina, at age 5, became part of her family’s aquatic act with her father, Harry, and brothers. Little Mina’s part of the act was to swim with her hands and feet tied. Harry Wylie could swim 120yds underwater and he kept his daughter Mina holding her breath almost as long while he decided whether to let her go to the Olympics.

In the summer of 1910/11, Mina was the girl destined to conquer the world of swimming. Mina had the first successes of her career that summer. In 1910 at Rushcutters Bay Baths, Mina set a world record, 1min 15.8 seconds, for the 100yds freestyle, beating the five year old record held by Englishwoman Jenny Fletcher by 1.5 seconds. With not a man in the audience, she won against class fields over 50yds, 100yds and 440yds. At the Australasian championships at Rose Bay, she beat Fanny Durack into second place in the 100yds breaststroke and the 100yds and 200yds freestyle. Both girls were using the trudgeon stroke then, but in 1911 they made separate decisions to switch to the crawl stroke which had been pioneered with such effect by Alick Wickham and the Cavill brothers.

In February 1912 at the Australasian titles at Rushcutters Bay preceding the Stockholm Olympics, Mina was beaten into second place by Fanny in the 100yds and 220yds freestyle races.

At the 1912 Stockholm Games, when women were allowed to compete in swimming for the first time, Mina finished second to her Australian teammate Durack in the 100m freestyle. The English women’s team won the relay ‘team race’ when the Australians had only two girls at the Games. “We wanted to swim twice,” said the Australian, “but they wouldn’t let us do it.”

Together they had to overcome the resistance of many people including the IOC President Baron de Coubertin to be allowed to swim at the Olympic Games. It took eight months to persuade the government and the Amateur Swimming Association that they should be allowed to compete and then, their selection was conditional upon them raising their own fares and being accompanied by a chaperone.

Before and after those Olympics, 20 years in a row Mina Wylie won at least one Australian national championship. Three times she won every women’s event at the Australian championships setting world records in trudgeon freestyle, backstroke and breaststroke. In 1911, 1922 and 1924, Mina won everything in Australia including the 100yds breaststroke, 50yds backstroke, and the 100yds, 220yds, 440yds and 880yds freestyle events.

Fanny Durack and Mina continued to dominate women’s swimming in Australia. Robbed by the war of their chance to win more medals at Berlin in 1916, the women eagerly accepted the offer of an American tour in 1918 however they had neglected to obtain official sanction for the trip, and were told after their arrival that they had been banned from competition by the ASUA.