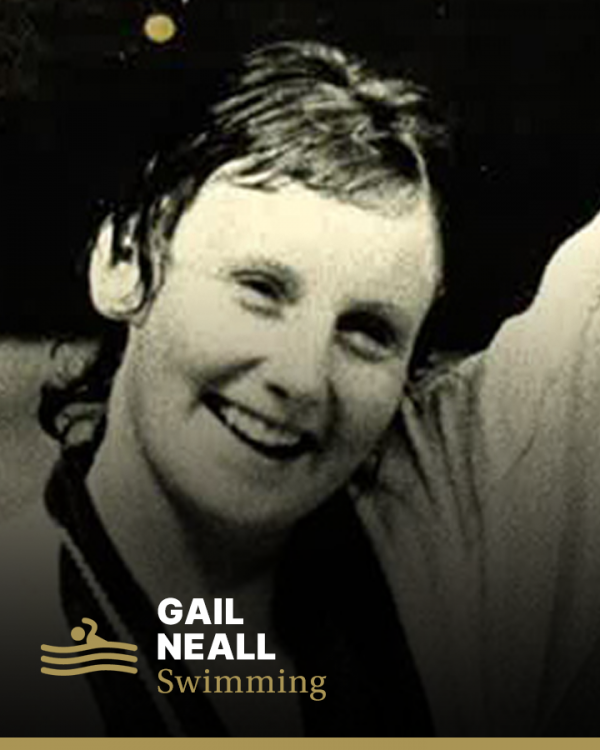 At age eight, Gail Neall’s coach couldn’t get her to take her foot off the bottom of the pool. Neall went on to win Olympic gold in the 400m individual medley in world record time, more than seven seconds faster than she had ever swum before.

When her family moved to Sydney, she came under legendary coach Forbes Carlile at age 10. With good coaching, success came quickly for Neall. At 11, she won her first New South Wales age group championship in the 100m backstroke. At 12, she entered her first national championship, winning three titles over the next eight years.

Neall qualified for the 1970 Edinburgh Commonwealth Games as the youngest member of the Australian team. There, she won silver in the 400m individual medley in 5:15.82, giving her the incentive to aim for the 1972 Olympic Games.

Neale was a schoolmate of Shane Gould at Turramurra High on the North Shore of Sydney. After switching to coach Don Talbot in 1971, Neall competed in three events at the 1972 Games, the 200m medley, the 400m medley, and the 200m butterfly. In her heat of the 200m medley, she swam her personal best time of 2:29.6 but failed to reach the final, which was won by Gould. She won her heat of the 400m medley in 5:11.89 seconds, a comparatively slow time, and was relegated to lane seven for the final. As she lined up against highly fancied rivals, it seemed almost audacious to hope that Neall would swim so far beyond her own proven capacity to win the race. She had a plan though, and she backed it with marvellous spirit. Her intention was to build up a good lead over the first two strokes, the butterfly and the backstroke, so that she could afford to be pegged back over her vulnerable leg, the breaststroke. If she did not surrender too much ground in the breaststroke leg, she and Talbot thought she had enough stamina to match it with the others over the final, freestyle stage of the race. She was not among the favourites but was quietly confident.

By the end of the first 100m, Neall was leading and extended the lead further in the backstroke, turning at the halfway mark with a full body length to spare. Then, in what was expected to be her weakest stage of the race, her opponents couldn’t catch up and was still in front by the time they reached the last 100m. However, in the freestyle, Neall was passed but swam desperately to the finish to win gold. The first four finishers all beat the previous world record. Neall’s time of 5:2.97 seconds was two seconds inside the old world mark. In her remaining race, the 200m butterfly, she finished seventh.

At the 1974 Christchurch Commonwealth Games, Neall had faded from her peak but won bronze in the 200m individual medley in 2:21.66. Her performance in the 400m event was 10 seconds slower than her best and left her last in the final. She retired soon after. As well as her world record, Neall had set seven national records and three Canadian open records and was inducted into the International Swimming Hall of Fame in 1996.