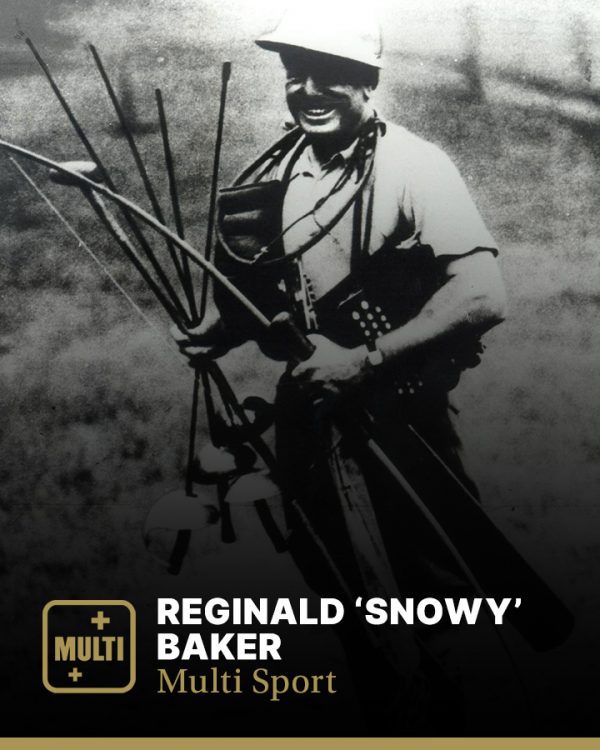 Reginald ‘Snowy’ Baker was inducted into the Sport Australia Hall of Fame in 1985 as an Athlete Member for his contributions to multiple sports.

‘Snowy’ Baker was the most versatile of all Australian sportsmen, and a star of stage and screen.

Sydney born, Baker competed at either state or national level in 29 different sports and was an international in five of them. He competed for Australia in rugby union, diving, boxing, swimming and polo. Baker was also accomplished at rowing, equestrian events, athletics, cricket, yachting, fencing, surfing and hockey. He believed in his fathers maxim that varied activity and the enjoyment of good health was the law of life.

In rugby union, Snowy played for the Eastern Suburbs, Sydney, New South Wales and Australia. He played half back for NSW in 1900 at sixteen years of age, and the following year gained his Australian cap against England.

In 1904 he was among Easts’ players who experimented by reverting to the old method of overhead passes. He played in the first two internationals against the British Lions at the age of 20, both won by the visitors, before injury forced his withdrawal from the third match.

At the 1908 London Olympic Games, he became the first – and only – Australian to compete in three sports in a single games. He started on the diving board coming a credible 7th against the powerful Germans who dominated the sport at the time. He then moved to the swimming pool where Baker and Frank Beaurepaire were part of Australasia’s 4x200m freestyle relay team. They finished fourth but walked away from the pool unlike Hungary’s silver medalists who had to be dragged out after almost drowning at the finish.

He won the silver medal in the middleweight boxing division losing a disputed decision to subsequent English cricket captain J W H T Douglas. Douglas’ father J H Douglas, as President of the Amateur Boxing Association, presented his son with the gold medal and Baker with the silver. The official report did not name referees, but a number of newspaper and magazine reports later claimed that Douglas senior had actually refereed the final and Baker confirmed this in an interview in 1952 with respected journalist Norman Bartlett. The pair met in a return match (bare knuckle) at a London club and Baker knocked out Douglas.

After the 1908 Olympics, he became an international celebrity, extensively touring Europe competing and demonstrating in swimming, diving, boxing, wrestling, and horseback riding.

Baker began Stadiums Limited, buying the Sydney Stadium in 1913 where he and his brothers became boxing promoters. He set a standard of boxing rules that the rest of the world followed.

Five years later Baker became Australia’s darling of the screen when his silent movie career took off. His movies included ‘The Enemy Within’, ‘The Man from Kangaroo’, and ‘The Shadow of Lightning Ridge’. During this same time, he was also writing and editing a publication titled ‘Snowy Baker’s Magazine’.

He taught Elizabeth Taylor, Shirley Temple, Douglas Fairbanks, Greta Garbo and Rudolph Valentino how to ride, fence and swim, and produced and starred in his own films in both Australia and America.

After World War I, he lived in California where he designed the equestrian course used later in the 1932 Olympics.

He died in America in 1953 at the age of 69. Snowy Baker was a quick witted wise cracking prankster who loved a bet and will always remain one of this country’s most legendary sporting figures.