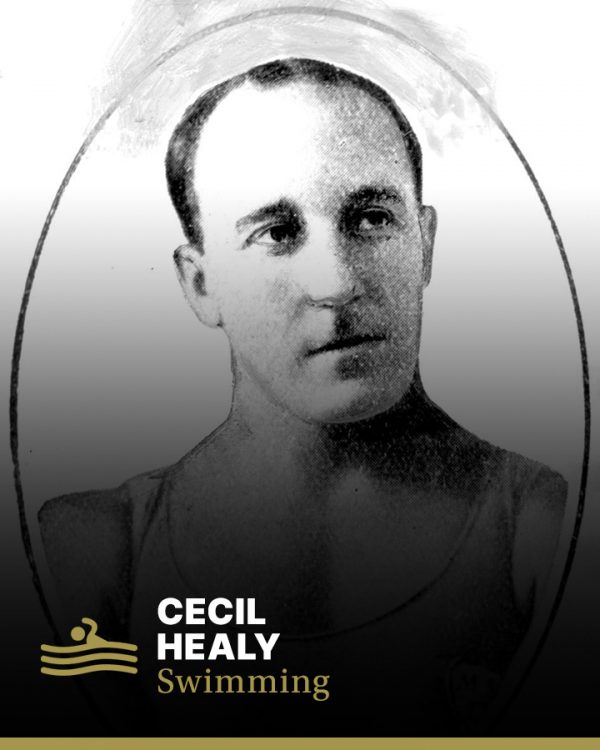 As well as winning gold with the relay team at the 1912 Olympics, Healy set a world record in the individual 400m, and was the only swimmer to contest the final of both the 100m and 400m. He held six Australian sprint titles, was a pioneer of surfing, was honoured for his bravery in surf rescues and was killed on the Somme, becoming the only Australian gold medallist ever to be killed in action while serving his country.

The son of a barrister, Healy was born in Darlinghurst, an inner-city suburb of Sydney, but moved with his family to the rural town of Bowral where he received his primary schooling. He moved back to Sydney in 1896, joining the East Sydney Swimming Club, of which Frederick Lane was also a member. Healy was also a member of the Manly Surf Life Saving Club.

In 1904, Healy posted the fastest ever time in the 100yds freestyle, 58 seconds, but there were no official world records at the time. In 1905, his time of 58 seconds in the 110yds freestyle at the Australasian Championships equalled the world record to earn him his first Australasian title. He was a proponent of the new crawl stroke, raising eyebrows among classicists who perceived it to be inelegant. He won the 110yds freestyle championships of Australia in 1905, 1906, 1908, 1909 and 1910 and took the 220y title in 1908. He created Australian records for the 100m freestyle in 1909 and 1910.

In 1906, Healy was sent to the 1906 Intercalated Olympics, one of only five athletes and the lone swimmer on the team, (Nigel Barker, G A Wheatley, George Blake, Harold Healy, and Cecil Healy) for whom the necessary funding was allocated. His preparation for the Games was hampered by a late departure from Australia, which left very little time for training after the long voyage, during which he had no opportunity to swim. At the Games in Athens, Healy came third in the 100m freestyle behind the United States’ Charles Daniel and Hungary’s Zoltan von Halmay. For Healy and for Australia, there was some comfort in Daniels’ acknowledgment after his win that he owed much to instruction he had received in the ‘amble’ crawl a year before from Barney Kieran.

After the Games, Healy toured Europe, giving many Europeans the first chance to see the crawl stroke; he competed in Hamburg, winning the Kaiser’s Cup, and also competed in Belgium, Netherlands and Britain. He won the 220yds British Championships, but was thwarted in the 100yds event by Daniels.

Returning to Australia, Healy missed the Australian season, but in 1908 he won the 110yds freestyle, but was unable to attend the 1908 Summer Olympics due to a lack of funds. In 1909 and 1910, he again successfully defended his Australian championships. In 1911, Healy inflicted the first defeat on Frank Beaurepaire beating him in a 440yds race. However, that year, Harold Hardwick claimed Healy’s 110yds title. In 1912, Healy came third in the 110yds, 220yds and 880yds events at the Australasian titles to qualify for the Australasian team at the 1912 Stockholm Olympics. (At the time, Australia sent a combined team with New Zealand).

On the way to the 100m final in Stockholm, Healy gave a demonstration of the immaculate sportsmanship that characterised his career. He in fact sacrificed the prospect of an individual gold medal to ensure that his own version of justice was served.

Healy and the American Duke Kahanamoku (credited with bringing surfing to Australia) easily qualified for the semi-final, with Kahanamoku clearly the fastest. However the three Americans failed to show up on the starting board for the semi-finals. They had mistaken the start time and were subsequently disqualified. The races were held, and with the American’s out, the qualifiers for the final were Healy (who won the first semi-final), fellow Aussie Billy Longworth (who was ill and about to scratch from the final on medical advice), and the Germans Walter Ramme and Kurt Bretting.

After the qualifiers had been named, Healy himself intervened, asking that the Americans be given another chance. As reported in the ‘Lone Hand’ in 1916, “The position was a difficult one for the officials, and the matter was referred to the International Jury to decide. Healy strongly urged the Australian representative to insist on the Americans being given an opportunity to compete in the final, insisting that it would be unsportsmanlike to bar their entry. Finally, mainly due to the Australians attitude, and in spite of the opposition of the Germans, the Americans were allowed to compete in a special semi-final…” The first two progressed to the final, Kahanamoku was one of them.

In the final, Kahanamoku won easily, by 1.2 seconds, over a bodylength, with Healy in second place.

In the 400m freestyle, Healy set a world record of 5:34.0 seconds in his heat, but this was improved in the semi-finals by George Hodgson of Canada and Harold Hardwick, by over ten seconds. Healy finished fourth in the final.

In the 4x200m freestyle, regarded then as the symbol of world swimming supremacy, the Australasian men (Healy, Harold Hardwick, Les Boardman and New Zealander Malcolm Champion) swam in the final against the United States, Great Britain, and Germany – with the Americans, led by Duke Kahanamoku the favourites. With the absence of Billy Longworth due to an ear infection estimated to cost the Australasian’s 10 seconds, it still downed the American squad by 15m in world record time.

After the Games, Healy toured Europe again, where he lowered Beaurepaire’s 220yds world record by more that three seconds in Scotland, before retiring and returning to Australia.

As a teacher and the leading Australian swimming writer, he developed regular breathing to the crawl stroke. Healy encouraged the practise of swimming daily for exercise, and was active in life saving at Manly beach, winning the Royal Humane Society silver medal for saving numerous surfers. He wrote a booklet, ‘The Crawl Stroke’, which had a circulation of 20,000 for free distribution in the United Kingdom.

A number of athletes who would have been chosen to go to Berlin for the 1916 Olympics went instead to combat, among them Harold Hardwick, Frank Beaurepaire, and Cecil Healy. Healy served as a quartermaster sergeant in Egypt and France. After attending officer training in Cambridge, in 1918 he became a second lieutenant in the 19th Sportsmen’s Battalion. Healy earned the sad distinction of becoming the only Australian gold medallist in Australian Olympic history to have been killed in action. Just 74 days before the Armistice was signed, he was cut down by a machine gun on the Somme.

Healy was inducted into the International Swimming Hall of Fame in 1981.

Rochelle Nicholls launched biography; Hell and High Water, about Cecil in April 2018. Healy remains the only Australian Olympic gold medallist to have given his life in the theatre of war. This book chronicles both Healy’s glittering sports performances and the torment behind this great, lost Olympian. A book that is part celebration, part tragedy.