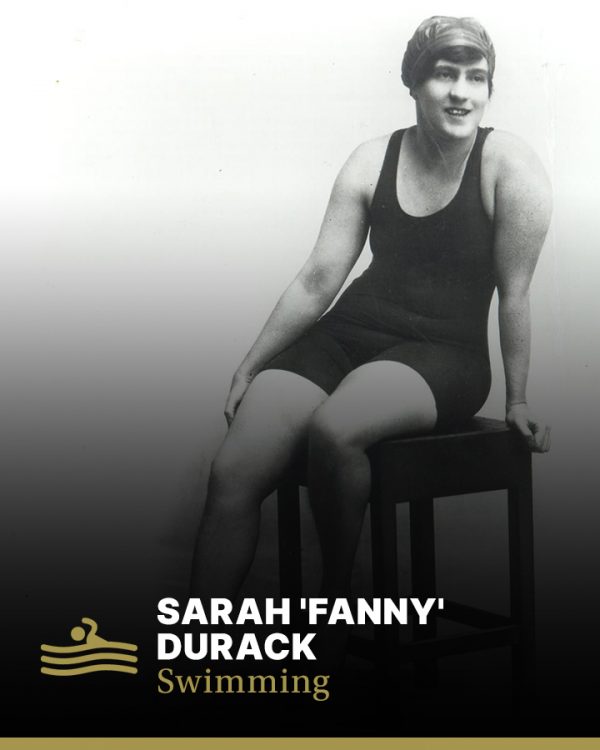 Fanny won gold at a time when female swimmers in this country competed under the most difficult of circumstances. Fanny was the forerunner of our great champions, Lorraine Crapp, Dawn Fraser, Shane Gould, and Susie O’Neill. She swam at a time when women were not allowed to race at meets if male spectators were present. In fact, large signs were displayed outside baths forbidding men to enter when the women were swimming.

Fanny was also hampered by the restrictions on the costumes girls could wear at the time. And of course, female swimmers were prohibited from travelling without female chaperones. Twenty seven girls contested the Olympic 100m including six from Great Britain and four from Germany. There were a variety of swimsuits used by the swimmers. Many reached down to the mid-thigh while some were sleeveless. Durack wore the heaviest costume of all – a woollen sleeveless garment with a skirt.

The pool in 1912 had been built in an inlet of Stockholm Harbour. Competitors swam without lane ropes and started from the wooden deck. There was no suggestion of starting blocks, swimmers simply took off from the deck.

Fanny won her heat, semi-final and eventually the final of the 100m freestyle. Her time in the final was 1:22.02 seconds. On her way to the gold medal she broke the world record twice which wasn’t broken for another eight or nine years until American Ethelda Bleibtrey caught up with her as much by age as by talent. Her friend and fellow Australian, Mina Wylie was second.

Following their success at the Games, the fame of the two Australian girls spread around the world. Fanny and Mina toured America three times over the next few years and helped to break down many of the taboos which prevented their ‘sisters’ from taking part in elite competitions. These world tours along with fellow Australian Annette Kellerman did more to promote swimming than any other woman. On a US tour in 1912, Fanny was recognised as “holding all championships for deep diving and for staying under water continuously.”

World War I deprived Fanny of more medals when the 1916 Berlin Games were cancelled. As the Antwerp Games of 1920 approached, she trained hard. It was her intention to defend her Olympic title but a week before the Australians were to go overseas, she had to have her appendix removed. Complications followed and she was forced to retire at the age of 29.

In 1967 she was inducted, posthumously, into the International Swimming Hall of Fame.