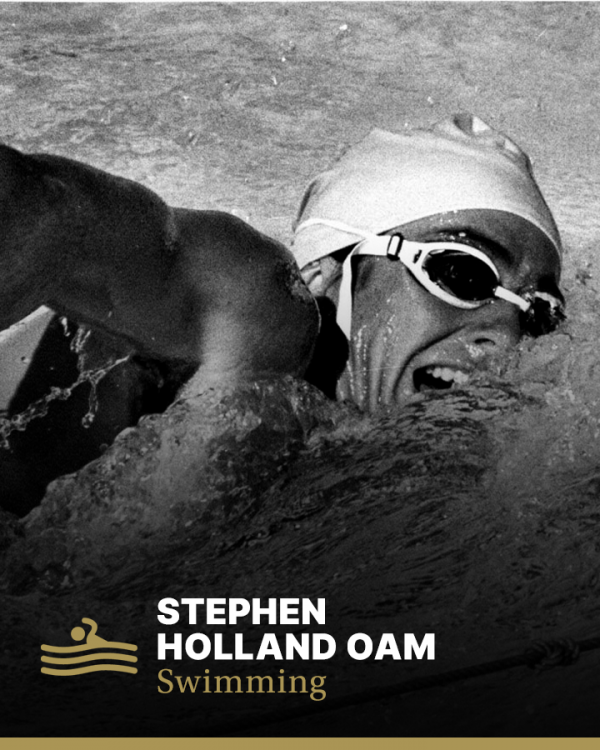 Stephen Holland became known as the ‘Super Fish’ when, during a series of sustained assaults on world distance records, his coach Laurie Lawrence declared that his two beat kick closely resembled the movement of a fish’s tail. He was 18 by the time the 1976 Montreal Olympics rolled around, and for three years he had been making it abundantly clear that he was the finest long distance swimmer the nation had known.

Holland twice set double world records -over the 1500m and the 800m -in the same race. He did it first in Brisbane as a 15 year old schoolboy at the Australian championships under the tutelage of Lawrence (also winning the 400m breaking the Australian and Commonwealth records with 3min 57.1sec). This qualified him to make his international debut at the 1973 World Aquatics Championships in Belgrade, Yugoslavia. He did it again three years later, five months before the 1976 Games. He also won every event he contested at the 1973 New Zealand Games, 1973 Japanese championships and the 1974 Coca Cola World Titles in London.

In 1974, Holland won gold in the 1500m freestyle at the Christchurch Commonwealth Games, leaving the silver medallist from New Zealand, Mark Treffers more than 25 seconds behind. Although the time was not a world record, his 800m split of 8:15.88 bettered his previous 800m record.

When Lawrence decided to go back to his old career as a schoolteacher, Bill Sweetenham took over Holland’s coaching. By the time Holland went to Montreal, he had broken twelve world records, and he hadn’t just shaved them, he had savaged them, sometimes taking more than 10 seconds off at a time.

In 1975, without a heated pool in which to train in Brisbane, he accepted an invitiation to spend four Australian winter months with the Mission Vieja Club in California. No money was available from the Australian swimming authorities so the club paid his fare, and his family scraped together enough for his living costs. He trained with Brian Goodell, the main United States hope for the 1500m. Looking at the results, it seems that Goodell benefited more from the experience than Holland.

At the 1976 Games, Holland finished fifth in the 400m, which was not his target distance, and when he lined up for the 1500m final, there were only two serious threats, Goodell, and fellow American Bobbie Hackett. Holland normally swam his races hard all the way, but this time, after conference with Sweetenham, his tactics were to go out slowly and leave himself with enough energy to out-swim the Americans in the closing stages. Hackett led for half the race, and Holland hauled him back at the 800m mark. He was unable to secure the break he wanted, and with 200m to go, was in trouble. First Goodell and then Hackett passed him, and they finished in that order, all well inside the world record. Goodell’s time was 15:02.40 and Holland was two second under the previous world mark with 15:04.66.

Unsure about his future and still battling the disappointment of finishing third, Holland retired after the Games. He had also won a total of eight national titles over 400m, 800m, and 1500m.

Holland later turned professional and competed successfully in surf races. He attempted to break veteran Des Renford’s record for the swim across Moreton Bay, Queensland, from Shorecliffe to Tangalooma but after 4 hours, 27 minutes, and 30 seconds in the water, he collapsed only eight kilometres from Tangalooma with the record in sight.

He was awarded the Medal of the Order of Australia (OAM) for his services to swimming in 1985.