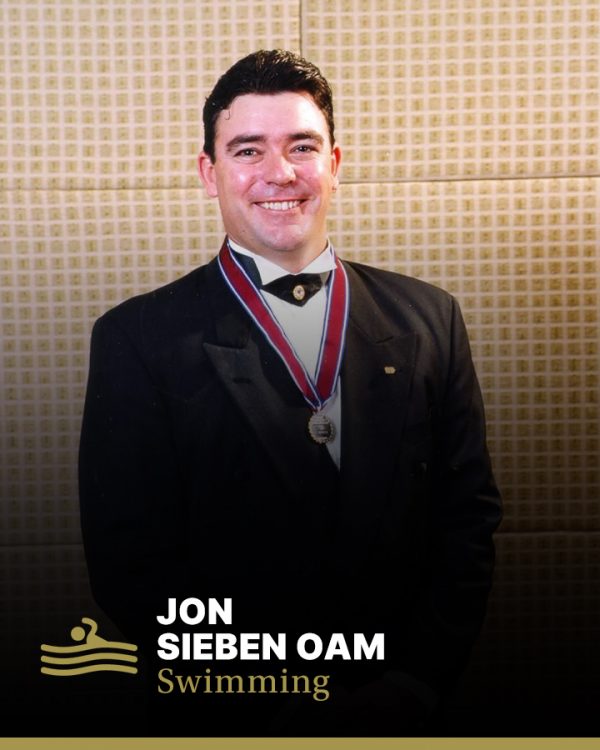 Hailing from the Northern Territory and then Brisbane, Queensland, Jon Sieben joined the Leander Club in 1977 and came under the influence of Joe King and later Laurie Lawrence. He made his international debut at the young age of 15 at the 1982 Brisbane Commonwealth Games, winning bronze in the 200m butterfly and gold in the 4x100m medley relay.

One of the most remarkable performances of the 1984 Los Angeles Games was that of Sieben in the 200m butterfly, an event not too dramatically weakened by the eastern bloc boycott. Known to his friends as the ‘Shrimp’, as he stood just 173cm, he went into the final as an absolute outsider, overshadowed by the 200m butterfly world record holder Michael Gross of West Germany (known as the ‘Albatross’ with his 200cm frame and 225cm wingspan) and Pablo Morales of the United States, holder of the 100m butterfly world record. Sieben was the youngest and most untried swimmer in the race and many thought he had done well enough just to reach the final, having swum two seconds faster than his previous best to become the fourth fastest qualifier. He did not agree, knowing that he could still do better, and refused to be in any way intimidated by Gross, who had already won two gold medals and was the clear favourite to make it three.

Sieben was 17 then, and had been a butterfly swimmer since the age of nine. He had been unemployed, on the dole, since he left Brisbane State High School at the end of the previous year. But he had great maturity. Sieben was excited and exhilarated by the atmosphere, but not nervous. He wanted to swim his own race and do his own thing.

Being well back at the halfway mark, as he had planned, he turned smartly in fourth place at the 150m mark behind Gross, Morales, and Venezuela’s Rafael Castro, and then exploded over the final stretch, powering past the leaders to win in world record time of 1:57.04 seconds, four seconds better that he had ever swum before. He was Australia’s first male swimming gold medallist since Brad Cooper won the 400m in Munich 1972. Sieben added bronze to his gold medal in the 4x100m medley relay

Shoulder injuries restricted his performances before the 1988 Seoul Olympics but he represented Australia in the 100m butterfly, finishing fourth in the final, and sixth in the 4x100m medley relay. He also competed at the 1992 Barcelona Olympics in the 100m butterfly and in the 4x100m medley relay but failed to reach any finals.

He was the Australian 50m, 100m and 200m butterfly champion. In 1985 Sieben was awarded the Medal of the Order of Australia (OAM) for his services to swimming.