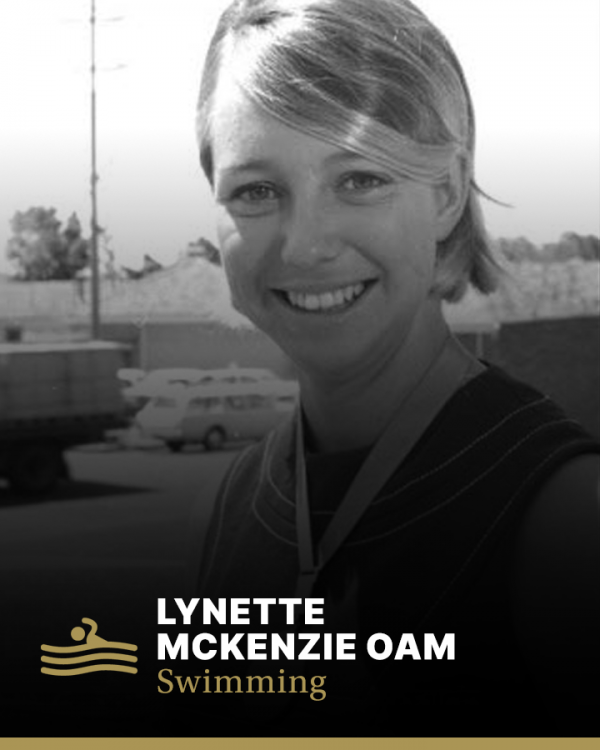 Lynette McKenzie OAM was inducted into the Sport Australia Hall of Fame in 1991 as an Athlete Member for her contribution to the sport of swimming.

Growing up in Perth, McKenzie surfed and swam often, and was a latecomer to the stroke that brought her glory, butterfly. In state junior championships, under the coaching of Harry Kelly, she tackled freestyle and backstroke events, and at one stage concentrated on the 400m freestyle. After that distance proved too wearing, she applied herself to sprints, particularly in freestyle and backstroke. After a flirtation with the medley, in which she found she handled the butterfly well, she competed in the junior nationals of 1966/67 in freestyle and butterfly. She failed to qualify for the finals in either stroke, but found herself increasingly comfortable with butterfly. In May 1967, at just 16, she joined the squad of another Perth coach, Kevin Duff, and concentrated on the butterfly.

Within a year she won the state and national 100m butterfly titles, and was chosen for the 1968 Mexico Olympic team. She thrived during the eight week winter camp in Brisbane, with Harry Gallagher setting her work but not attempting to make any drastic changes to her technique. When it became clear that she wasn’t keen on endurance work, he settled for a program of repetition sprints. In Mexico City she found herself unstressed by altitude problems. Nor were there problems with expectations. She went to Mexico very much as an outsider, unmentioned by Australian sportswriters among the possible medallists.

She was in awe of her major opponents, the Dutch world record holder Ada Kok and the Americans Eleanor Daniel and Susie Shields. Her first event was the 4x100m medley relay, in which she combined with Lynne Watson (backstroke), Judy Playfair (breaststroke), and Janette Steinbeck (freestyle) for the final to win silver behind the United States. It was a satisfying result, the Australians bettered the Olympic record, and each girl broke the Australian record in her stroke. Lyn’s spirits were boosted not only by that swim; Dawn Fraser, on the spot with an invitation from the organisers, gave her advice and encouragement, and Michael Wenden gave her a great deal of support.

She surprised everyone in the final of the 100m butterfly by taking the lead as she surfaced from her dive, and leading all the way to win in 1 min 5.5 seconds from the two Americans. Lyn McClements became the first Australian woman to win an Olympic gold medal in the butterfly stroke and was the only gold medal won by the Australian women’s team in Mexico City. In her other individual events, the 200 metres butterfly, she did not progress beyond her heat.

After the Olympic triumph, Lyn was regarded as a certainty to win gold at the 1970 Edinburgh British Commonwealth Games. She won the 100m and 200m butterfly at the Australian championships in 1969, but was disqualified at the 1970 national titles for an alleged illegal leg action – a broken kick. Passed over for selection in the 1970 team, she retired from swimming. It was a sad end to a brief but golden career.