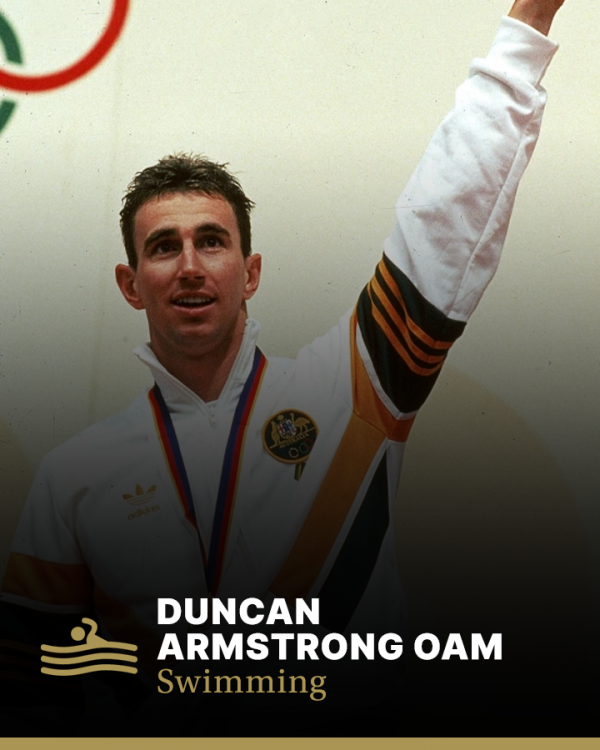 Duncan Armstrong OAM was inducted into the Sport Australia Hall of Fame in 1993 as an Athlete Member for his contribution to the sport of swimming.

Armstrong rose to national renown and international fame at the 1988 Seoul Olympics, breaking the world record to win the 200m freestyle gold medal in a time of 1 minute 47.25 seconds. In his specialist event – the 400m freestyle – he won a silver medal, taking more than five seconds off his previous personal best time.

Hailing from Rockhampton, Queensland, Armstrong forged a long term winning relationship with national swimming coach, Laurie Lawrence. The partnership gained prominence when Armstrong, already with national success to his credit, collected gold at the 1986 Commonwealth Games in Edinburgh in the 4x200m relay and 400m freestyle events. This was followed by success in the 200m and 400m freestyle events in the Australian championships in 1988. It was ideal groundwork for Seoul, with Laurence and Armstrong effectively dealing with the challenge posed by the presence of past and present world record holders -Matt Biondi (US), Artur Wojdat (Poland) and Michael Gross (West Germany) – in the 200m triumph.

Having effectively retired from competition following the 1988 Olympic Games, Armstrong made a comeback to swimming in 1991 and qualified for the Australian team to the 1992 Barcelona Olympic Games as a relay team member.

After representing Australia at two Olympic Games, Armstrong retired from the pool in 1993 to pursue a career in media and corporate coaching.

1988: Named Young Australian of the Year
1989: Awarded a Medal of the Order of Australia (OAM)