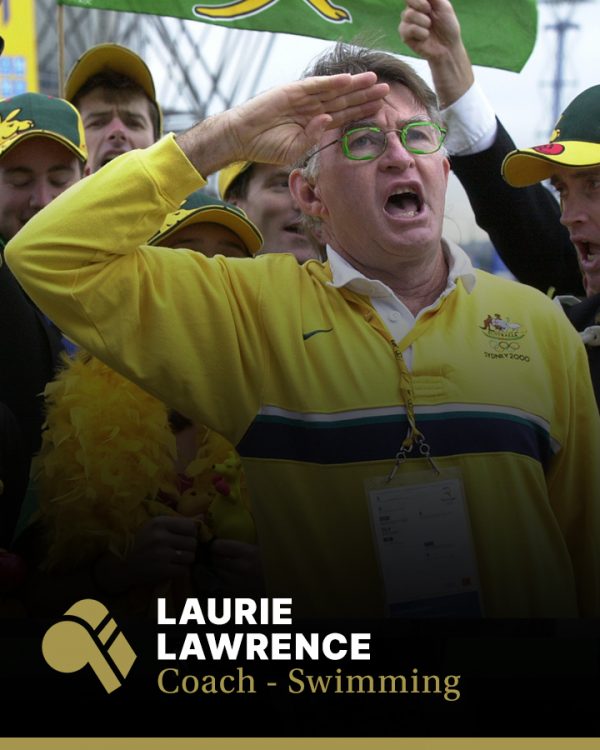 Laurie Lawrence was inducted into the Sport Australia Hall of Fame in 1991 as a general Member for his contribution as a coach to the sport of swimming.

His voice beams with enthusiasm, pride and with the feeling that nothing easy is worth doing. It is defying the odds… doing the impossible that excites Laurie Lawrence. He is the master innovator. He inspires confidence and belief. No challenge is too great, no task is impossible. Everyone around him soaks in his enthusiasm.

And that is just what Lawrence has done – create the atmosphere for his swimmers to succeed. To some people, Lawrence is a crazy, over-competitive mad man. But his shining side, his greatest asset, is his ability and attitude in helping young Australians achieve their goals. He is the kind of coach who could have coached in any sport and been successful. Even from his own competitive days as an athlete playing rugby for his country, it was winning for Australia that counted for Lawrence. Displaying typical grit and determination, Lawrence fought for and gained a place as half back in the Wallabies team which toured New Zealand in 1964.

Win and produce winners is what he did, and in a way that only Lawrence could do. His first big charge was Helen Gray, whom he shocked in 1970 by throwing her Queensland silver medal over the fence as his way of saying, “Don’t be complacent. You can be a medalist at the Commonwealth Games if you re-focus, work hard.” She did, winning silver in the 800m freestyle and a birth on the 1972 Olympic team.

From being around the Townsville Pool his father ran, and sparked into swimming by Jon Henricks, Lawrence has become a swimming legend and a creator of champions, capable of lifting the spirits of those around him to soaring heights. He is many other things too – extrovert, patriot, poet, humorist, and singer. His swimmers have set 23 world records, won 10 gold medals, 11 silver medals and 12 bronze medals at Olympic level, and he has coached Australian teams to three Commonwealth Games and three Olympic Games. He possesses the qualities with which he works to instill in every competitor: be proud, persist, work hard, stand tall, don’t quit, don’t bend, don’t break, don’t fall.

There would be few who do not know of Lawrence or his spirited personality, his sense of humour or his zest for life. For those who know him well there would be no disputing that his manner is direct, sincere and honest. Whatever Lawrence is involved in, he gives all of himself. He cares deeply about the people he influences and he refuses to rest until he has achieved his best.