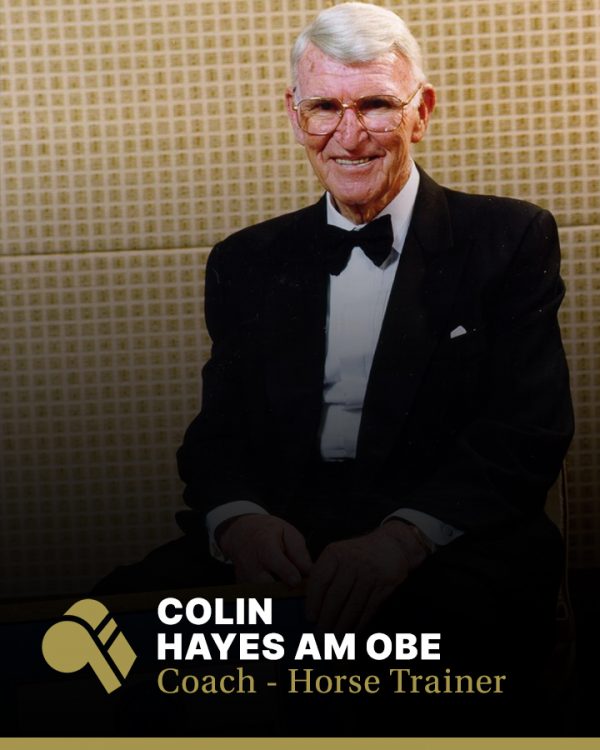 After a short career as an amateur jockey, Colin Hayes turned his hand to training and in time was to establish a training and breeding establishment of world renown. He became owner/trainer from 1945 to 1950 before he obtained his trainers licence in 1950.

He originally trained out of Semaphore before establishing Lindsay Park Stud in South Australia’s Barossa Valley which was a showpiece for his training and breeding empire that achieved some remarkable results.

Hayes trained his first winner, Surefoot, at Strathalbyn on October 15, 1947 in a jumps race, winning $190. By the time he had retired in 1990 Hayes had trained 5333 winners in a 43 year career. He won his first Adelaide Trainers Premiership aged 28 and went on to win it another 26 times. He won the Melbourne equivalent 13 times in succession from 1978 to 1990.

Recognised as the most outstanding private training establishment in Australia, Lindsay Park set Hayes on the road to an outstanding career which saw him breed 3461 winners of 12,162 races, and train a total of 5333 winners, including many great racehorses including Dulcify, Rory’s Jester, So Called and Zabeel.

Hayes considered Dulcify the best horse he ever trained and was thrilled when it annihilated the opposition to win the 1979 Cox Plate by a record seven lengths. Ten days later he was shattered when it broke his pelvis during the running of the Melbourne Cup and had to be destroyed.

He retired in 1990 having earned over $119 million in prizemoney. When he retired he handed the reins to son David who continued the family tradition of producing winner after winner.