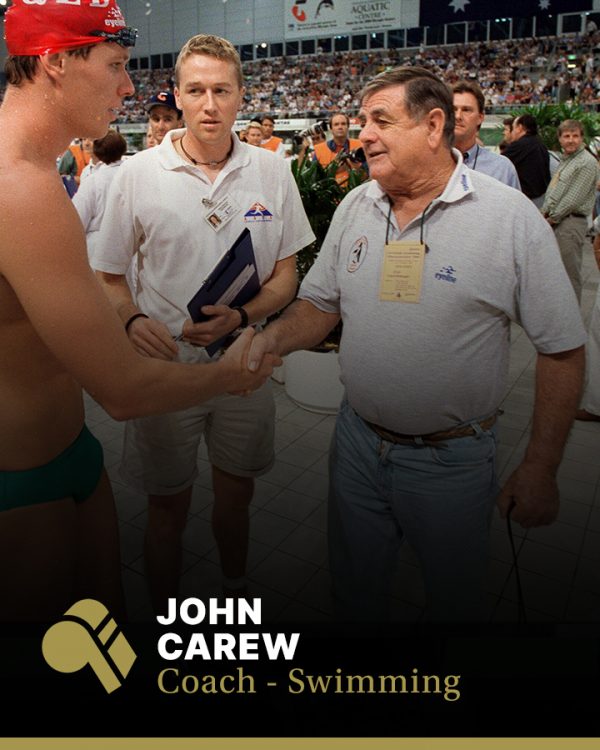 John Carew has earned many accolades over the years, but few could have been more treasured than the World Swimming Coaches Association award as Coach of the Quadrennium for 1992-96.

The award was undoubtedly triggered by the feats of his long-time protégé Kieren Perkins at the 1992 and 1996 Olympics, but it was also recognition by his peers of the advances John Carew had pioneered in distance swimming training.

Swimming Australia made a similar judgement in appointing him coach at three Olympic Games (1992, ’96 and 2000), two word championships, four Pan Pacific championships, and two Commonwealth Games between 1989 and 2000. In all those roles his scientific approach to developing innovative training programs left an indelible mark on his sport.

He was innovative at every level, from learn-to-swim coach to mentor of elite athletes.

John Carew died aged 81 in November 2008, just weeks after being admitted to the Sport Australia Hall of Fame, but he would have been proud of the tributes that flowed on his induction

Carew began his career as a swimming instructor at the Surfers Paradise Surf Life Saving Club in the early 1950s.

His first coaching position was at Davies Park Pool, West End, in Brisbane’s inner-south, and he later worked for several years at various Brisbane City Council-owned pools, where he met his wife Barbara.

The couple bought land at Indooroopilly in the late 1970s where they opened their first pool, which is now the John Carew Swim School.

It was there that a young Kieren Perkins, who came to Carew as a nine year old, honed the skills and developed the physical stamina and mental strength that were to lead him to world records and gold medals in the 1500 metres freestyle at successive Olympics in 1992 and 1996.

On Carew’s death Perkins paid a moving tribute to his long time mentor: “Everything I achieved I owe to Mr Carew. He not only made me the swimmer I was but also the man I am today.

“He was a wonderful influence on my career and my life.”