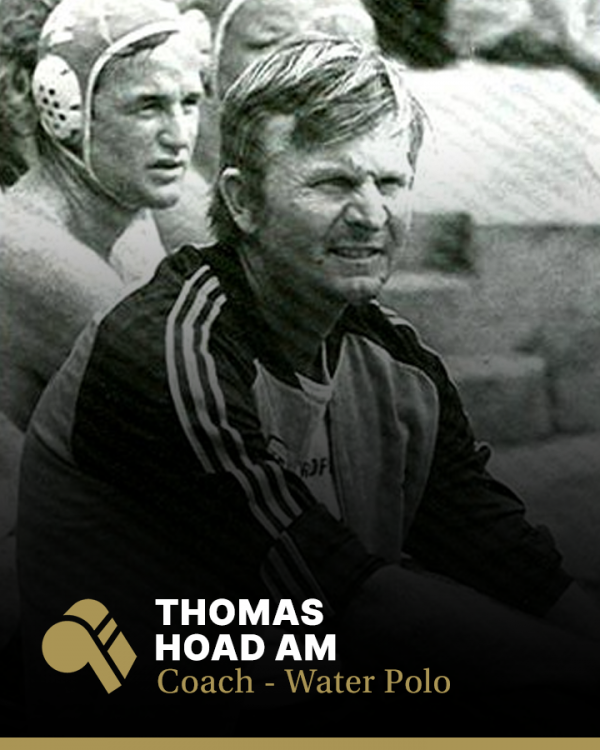 Thomas Hoad AM was inducted into the Sport Australia Hall of Fame in 2021 as a General Member for his contribution to the sport of water polo through administration and coaching.

Tom Hoad’s contribution to water polo was so deeply ingrained that he was fittingly bestowed with the nickname ‘Mr Water Polo’. His extraordinary service to the sport as a player, team leader, coach and long-time administrator spanned six decades.

While Hoad’s contribution to water polo as a competitor and coach was considerable, his work as an administrator and advocate for athletes across numerous sports proved every bit as ground-breaking and influential.

This included his role as chairman of five international events, including two highly-successful World Swimming Championships held in Perth in 1991 and 1998, and his elevation as a member of the Order of Australia (AM) for services to “sport, particularly water polo” in 1994.

Tom Hoad was born in Perth in March 1940, six months after the start of World War II. He studied at Aquinas College, excelling in foreign languages and mathematics. It was there where his passion came to the fore as part of the swimming team for six years (1952-57), notably as a junior butterfly champion, before switching to water polo – a move that would help define his future.

Hoad first represented Western Australia in water polo as a 19-year-old in 1959 before graduating to the national team. By the time he had retired as a player and captain of his country after the 1972 Olympics, he had helped to transform the sport in this country. He was an extremely fit and strong competitor, playing mainly as a forward but sometimes as a defender. He was an inspiring captain and later a tactically shrewd national coach.

He competed at the Olympics for the first time in Rome in 1960, before being selected captain of the Australian Water Polo men’s team for the next three Games (Tokyo 1964, Mexico City 1968 and Munich 1972). He spent time studying in Italy, Germany and Hungary in the 1960s including, but also brought home training and tactical techniques from some of the great European teams having played and coached with Rote Erde Hamm the 1963 German Water Polo champions.

Hoad made a successful transition from player to coach, taking over the national team in 1975. He went to four Olympic Games as Australian coach (Montreal 1976, Moscow 1980, Los Angeles 1984 and Seoul 1988) his first two as an amateur whilst being the senior master in charge of languages at Hale School in Western Australia. Hoad would retire from coaching following the Moscow Olympics to look after his three young girls after his wife passed away from Cancer. One of his greatest achievements came at the 1984 Games when the team finished fifth, losing fourth spot only on a tight countback. Hoad had comeback to water polo in the lead up to Los Angeles taking up Australia Water Polo’s first full time coaching director and National men’s coach.

After retiring from the national coaching role, he continued to help assist in the promotion of water polo, while also seeking greater opportunities and facilities for athletes of many sports through his administrative roles. He was president and vice president of the Australian Water Polo Association, chairman of the Western Australian Water Polo Association and served his beloved Melville Water Polo Club in many different capacities. His mentoring and coaching of young Australian athletes across many decades is his ongoing legacy to sport in this country.

On a grander scale, Hoad was a drive force behind Perth hosting the 1991 World Swimming Championships as the event’s executive chairman. He sought funding from the government and represented the bid on a world stage in seeking to secure the nomination for what proved a highly-successful event. He was also the chairman of the organising committee of the 1998 World Swimming Championships in Perth, which was viewed by two billion people around the world.

Hoad’s tireless contribution to sport and sports management was recognised when he was awarded the Order of Australia in 1994. Two years later he was inducted into the Western Australian Institute of Sport Hall of Fame. He was also named Western Australian Citizen of the Year in 1989.