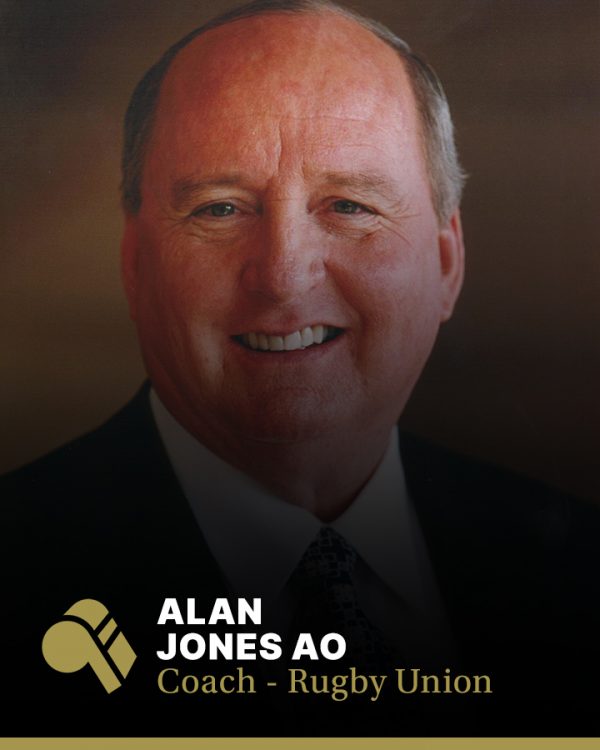 Alan Jones AO was inducted into the Sport Australia Hall of Fame in 1989 as a General Member for his contribution to the sport of rugby union.

Jones’ association with semi-professional rugby began in 1982 when he was appointed as part-time manager of the New South Wales rugby union team. The next year he served as first-grade coach for the Manly rugby union team, leading them to the premiership for the first time in 32 years.

In 1984 Jones was elected coach of the Wallabies, taking over from Bob Dwyer, and coached Australia until early 1988. The team won 102 matches making him the most successful Australian rugby coach ever. His teams won 23 Tests out of 30, and four of those losses were by just a point.

In 1984, he coached the Wallabies to their famous Grand Slam with victories over England, Ireland, Wales and Scotland and a Barbarian side made up of the best players of those countries and France. The side included Mark Ella, Nick Farr-Jones, David Campese, Michaele Lynagh, and Simon Poidevin. During this tour, one British newspaper described Jones as “the most approachable and articulate rugby person to visit Britain in the last 40 years”. The London Times sports writer stated that he “has the most analytical brain I have encountered in charge of a national side”.

In 1986, Jones coached the Wallabies to Australia’s history making Bledisloe Cup victory in New Zealand, the first time such a victory had been achieved in 39 years. The Wallabies were only the second team in rugby history to win a series against New Zealand on their home ground.

From August 1990 to August 1993, Jones coached, without a fee, the Balmain Rugby League Club in the Sydney Winfield Cup Competition, and in August 1993, he was appointed, also without payment, as Director of Football for the South Sydney Rugby League Football Club.

In March 1985, Jones was recruited to join Radio 2UE as their morning radio host and quickly established himself in the competitive world of Sydney radio.

In 2004, Jones was made an Officer of the Order of Australia (AO) partly for his service to the media and sports’ administration, but also helping many charities, including Youth off the Streets, the Children’s Hospital, Starlight Foundation, the Sir Edward Dunlop Medical Research Foundation and the Heart Research Institute.