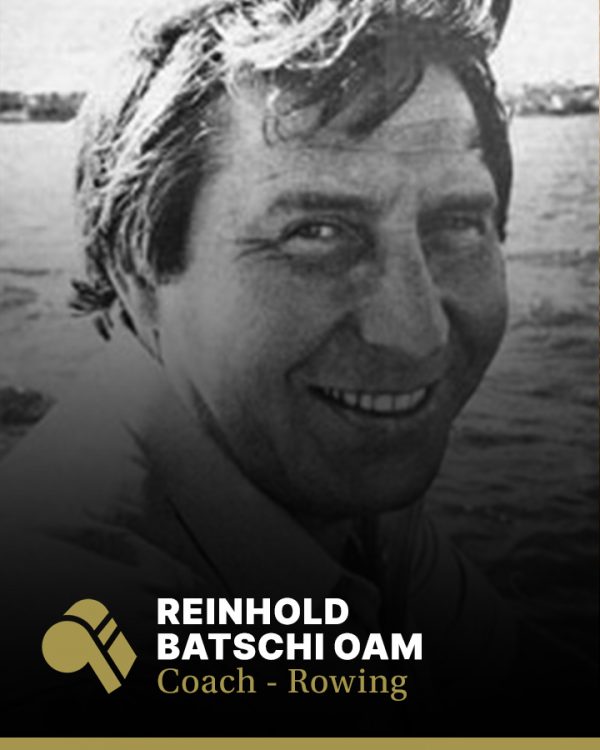 After a brief rowing career in the 60s, Reinhold Batschi was the National Director of Coaching at the Australian Rowing Council (now Rowing Australia) for 10 years from 1979 and acted as an advisor to national rowing coaches in 1979 and 1980. In 1981 and 1982 he coached successful senior B crews, which raced at the Match des Seniors in Europe. In 1983 Batschi first coached a national crew at the world championships with immediate success, a bronze medal.

During his time at the ARC, Batschi combined his energy with foresight to set about making Australian rowing what it is today, a nationally integrated sport and a major force in international competition. He introduced a number of initiatives, some of which have been carried through to other sports, such as the apprentice coach system. In rowing, he introduced the rule that all scholarship holders must be and remain members of clubs, and when entered in regattas, give acknowledgement to their clubs.

He developed a standard technique throughout the country after travelling to all states and spending time with top state coaches and crews while giving seminars to other coaches.

Under Batschi, a selection technique was set up with the aim of ensuring individuals were brought into focus and consistent performance over a number of races was the key, rather than “flash in the pan” results.

He designed a coaching education system that developed into the National Coaching Accreditation Scheme affecting all levels of the sport. He ensured that Australia competed in junior and senior B competitions so that those selected for senior A’s would already have some international experience and, more importantly, hard winter training behind them. In 1981 Australia’s first junior crews attended the world junior championships, while in 1983 Australia competed against New Zealand at a national level in senior B competition for the first time.

Batschi published standard training programs as guides for coaches on the best method to ensure that crews were properly trained in terms of endurance, strength etc… and he also published, for the first time, rigging details based on research done at world championships.

Batschi has been head coach of every Australian Olympic rowing team since 1980. From 1984 to 2000, Australia won 16 Olympic rowing medals (four gold, five silver and seven bronze). AIS rowers contributed to 11 of these (three gold, four silver and four bronze). The highlight of his coaching career was in 1986 when the Australian men’s eight won the world championships and the Commonwealth Games gold.

As a rower, Batschi won bronze in the coxed four in the 1967 European Championships and took seventh place at the 1968 Mexico Olympics. In 1987 he was awarded the Medal of the Order of Australia (OAM) for his services to rowing, particularly through coaching.