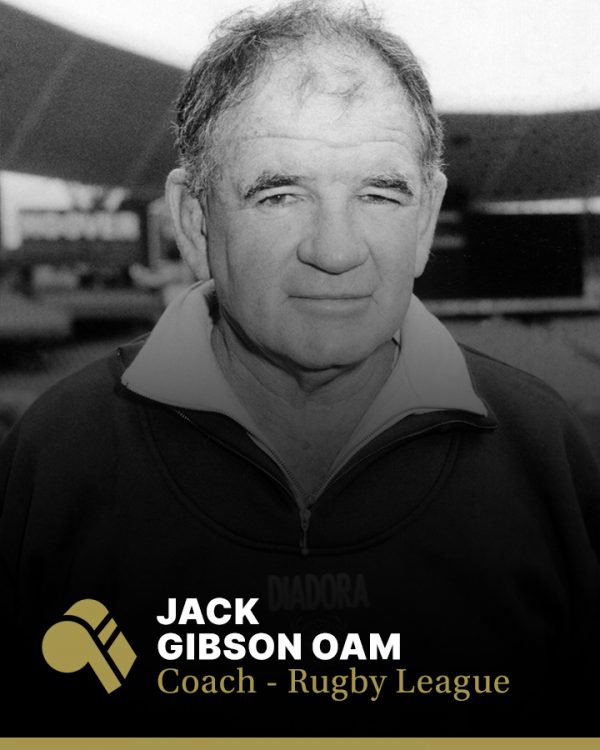 Jack Gibson is generally regarded as one of the greatest coaches in Australian rugby league. He modernised league in Australia, and his professional attitude in the 70s ensured better conditions for coaches.

Gibson was regarded as the ‘guru’ coach in Australian sports circles, not only for producing successful sides wherever he coached but also for his thirst for innovation. He introduced lots of new coaching and training methods into the sport in the 60s, 70s and 80s, when rugby league at the top grade was still played and coached on a semi-professional (part-time) basis.

Gibson often studied coaching methods in other sports, he liked to pick up and experiment with coaching and training methods which could be incorporated into his rugby league coaching. In particular, he would often travel to the United States to watch NFL teams play and train, particularly in relation to attitudes of the players and the psychology of coaching. Gibson was a massive fan of legendary Green Bay Packers coach Vince Lombardi and was clearly influenced but his coaching and management style.

Gibson was also known for his great quotes. Players, coaches and journalists in Australia would hang onto every word he said. Some of his quotes are still referred to within rugby league circles.

He began his first-grade NSWRL coaching career at Eastern Suburbs in 1967. The previous year they had not won a match but under Gibson they made fourth place in 1967, and in 1968 finished fourth -both efforts considered to be footballing miracles. He left Easts in 1969 to join St George, taking them to the Sydney Premiership in 1971. He then left St George for a spell at Newtown, where they made the final after not reaching the semi-finals since 1955, before re-joining Easts. Gibson led the Roosters to back-to-back premiership titles in 1974 and 1975.

He then left Easts for a second time to join South Sydney in 1978 and 1979. He endured his leanest spell at Souths, he failed to get the Rabbitohs to post-season play-offs. Gibson had previously never missed out on play-off football as a first-grade coach for any of his other clubs.

Gibson then joined Parramatta from 1981 to 1983. He led the Eels to their most successful era in their history, winning the premiership in all three years. The 1983 title took Gibson’s personal premiership tally to five, making him the then joint-most successful coach in Australian premiership history (Brisbane Broncos coach Wayne Bennett beat Gibson’s record after the Queensland club’s 15-8 win over Melbourne Storm in the 2006 NRL grand final).

Gibson went on to coach Cronulla for a further three years until 1987 and, finally, the New South Wales State of Origin team in 1989 and 1990, retiring from coaching in 1990.

In 1988 Gibson was awarded the Medal of the Order of Australia (OAM) for his service to rugby league.