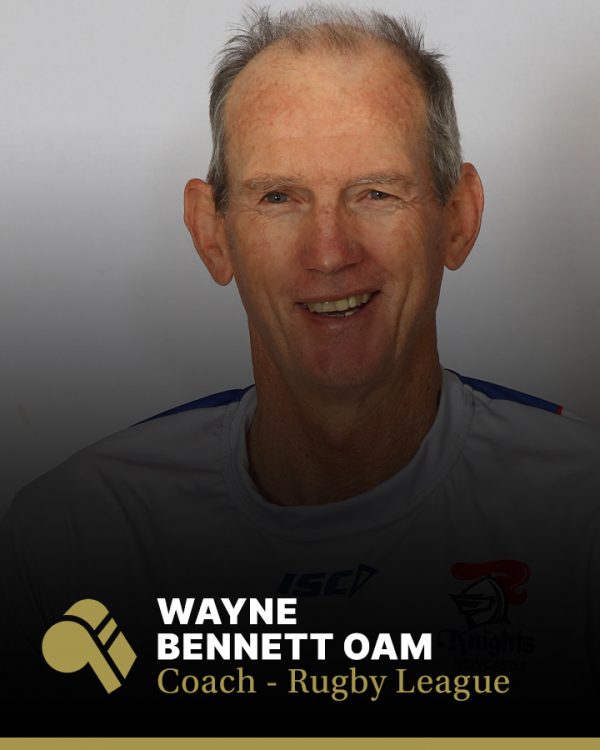 Wayne Bennett OAM was inducted into the Sport Australia hall of Fame in 2012 as a General Member for his contribution to the sport of rugby league.

Bennett was appointed inaugural coach of the Brisbane Broncos when the team was founded 1988. When he finally relinquished the job in 2008 his coaching record stood at 532 games and six Premierships.

Those figures alone would ensure him a place in the pantheon of Australian sports heroes, but his full coaching record is even more lustrous; at a State level he coached Queensland Origin victories in 1987, ‘88 and Internationally he guided Australia in 1998 and 2004-5, winning 12 of 16 matches (including a Trans Tasman Trophy and Tri Nation series).

Bennett was a talented payer (wing) in his own right. Growing up in country Queensland he played for Warwick and for Past Brothers, won State selection for Queensland nine times and for Australia twice, both appearances during the 1972 tour of New Zealand.

His coaching career began at Ipswich in 1976 followed by stints at Souths and Brothers. He took a break from coaching while his children were young then returned, making his mark as a coach of juniors, including the Queensland Police Academy under 18 team were he honed many of the coaching methods that were later to prove so effective.

He became senior coach at Souths in 1984 leading them to a grand final in his first season and a Premiership in his second. That led to his first appointment in 1986 as State of Origin coach, but it was an inauspicious start with Queensland losing 0-3 to NSW.

He moved south the following year to become co-coach of the Canberra Raiders, but was retained as Queensland coach. This time he guided them to an Origin series victory over NSW, repeating the triumph the following year (1988) with a 3-0 series whitewash.

He stepped down from State duties after that to series to concentrate on moulding the newly formed Brisbane Broncos. He guided them to their first Premiership in 1992 and on the back of that success the Broncos travelled to England for the World Club Challenge, defeating English champions Wigan for the title. When the Broncos won a second Premiership the following year Bennett’s reputation as a coach was fully cemented.

He was re-appointed Queensland coach in 1995, but stepped down after divisions in the game when players who had joined the breakaway Super League were not selected. On the back of further Broncos success he was reappointed State coach in 1998 and also appointed to coach Australia for the first time -with Australia winning both Tests against New Zealand.
The same year Bennett guided the Broncos to their fourth Premiership.

Chris Anderson took over the national team in 1999 but Bennett continued to have success with the Broncos who brought up their fifth premiership in 2000. He returned as Queensland coach in 2001, pulling off a series victory against NSW after controversially recalling Allan Langer from overseas for the final deciding match.

Bennett had been instrumental in the revival of the Tri-Nations series and was appointed Australian coach when it was resumed in 2004. Australia won the series and also reclaimed the Trans-Tasman Trophy from NZ.

Success became more elusive at club and international levels in the following years. He stepped down form the national post after a crushing 2005 defeat and relations with the Broncos soured after negotiations for him to move to Sydney Roosters became public.

He coached the Broncos to a sixth premiership in 2006 but relationship was never fully restored. In February 2008 he asked the Board for early release from his contract to allow him to coach St George Illawarra in 2009.

In the 2008 season he became assistant coach to the New Zealand side which won the Rugby League World Cup.

St George Illawarra finished top of the ladder in their first season under Bennett but were beaten in the finals by his old side, the Broncos. In 2010 they won the Grand Final to give Bennett his seventh Premiership as a coach.

In 2012 he moved to become coach of the Newcastle Knights. He has not so far been able to achieve success there, but whatever the future, his record to date ensures his place in Rugby League coaching history.