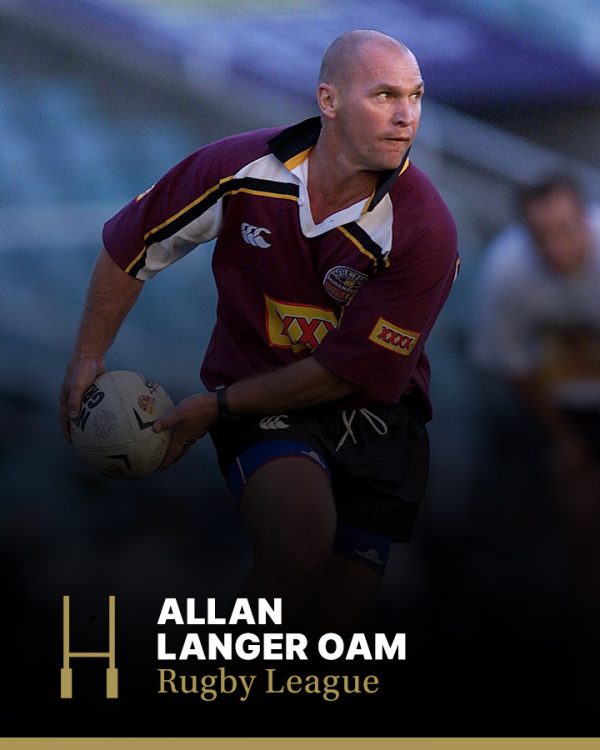 Allan Langer changed perceptions of what was required to be a Rugby League star.

Despite his abundant talent, many believed when he was first selected to play for Queensland in 1987 that at 165 cm and 79kg he did not have the physical bulk required for State of Origin football.

His record makes a mockery of that thought: On his retirement in 2002 he had played 258 games for the Brisbane Broncos, represented Queensland 34 times and Australia 24 times. He played in four World Cups and captained the Broncos to four Premierships. Along the way he won most of Rugby League’s major awards, including the Clive Churchill Medal, the Wally Lewis Medal and the Dally M Award.

Born in Ipswich (1966) Langer began playing Rugby League with the Northern Suburbs Tigers — playing impressively enough to earn a place in the National schoolboys side in 1982. By 1986, aged 17 he was playing first grade with the Ipswich Jets and a year later won his first Queensland State of Origin selection.

In 1988 he was signed by the newly formed Brisbane Broncos and in his first season became the Bronco’s Player of the Year and earned Test selection against Papua New Guinea.

In 1992 he became Broncos’ captain and led the club to its inaugural Premiership, earning himself a Clive Churchill Medal for best player afield in the Grand Final. He led them to another Premiership the following year.

Langer was dropped from the Australian side during the 1994 tour and was not selected again in 1995 because he had signed with the new Super League.

In 1997 he captained the Broncos to a Premiership in the Super League and in ’98 led them to victory again in the intergrated National Rugby League competition. In that year Langer and Bronco’s coach Wayne Bennett became the first captain and coach combination to steer sides to the NRL Premiership, a State of Origin Series victory and a Test series win in a single year.

Langer retired from NRL during the 1999 series but later went to England to play with the Warrington Wolves.

In 2001, Wayne Bennett, then coaching Queensland, surprisingly selected Langer – then 35 and playing in England – to play the third and deciding State of Origin match against NSW.

He returned to the Broncos for one final season in 2002. Despite personal good form, the Broncos were unable to win the Premiership and Langer finally retired. He left with his record firmly entrenched as one of Queensland’s greatest Rugby League stars.