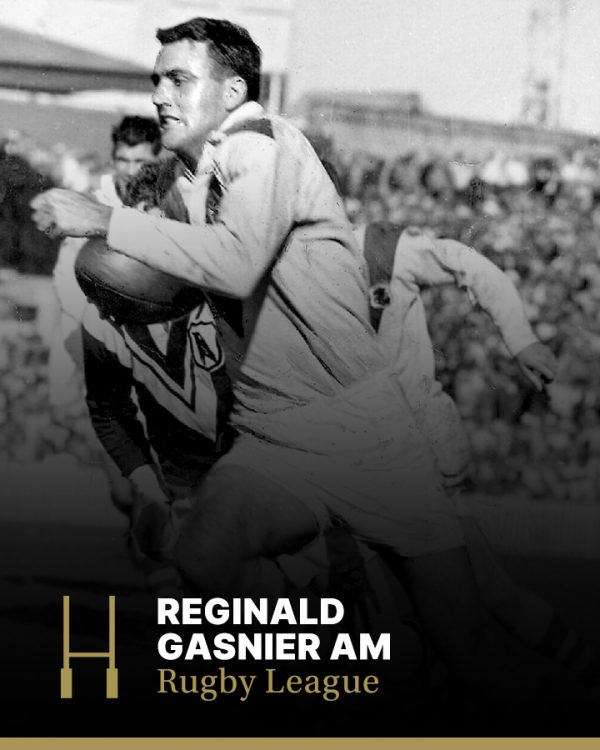 Reginald ‘Reg’ Gasnier was Inducted into the Sport Australia Hall of Fame in 1985 as an Athlete Member for his contribution to the sport of rugby league and was Elevated to Legend of Australian Sport in 1995.

In a career that started with St George in 1958 and ended despairingly in France in 1967, Reg Gasnier was pure magic.

Gasnier has been described by many as the ultimate all-round rugby league player, possessing speed and a beautiful running style, good hands, a superb change of pace, great anticipation and movement along with being a sound defender, because of this he was dubbed ‘Puff the Magic Dragon’.

In 1957 at the age of eighteen Gasnier was forced to choose which sport he would attempt to forge a career in, after many tipped he would achieve state honours in both cricket and rugby league.

Gasnier joined St George as a teenager in 1958 after playing his junior football for Renown United. He was 17 when he turned up at a St George pre-season training session and asked for a trial. He impressed well enough to maintain a spot in the third grade side and after just six games, moved up to first grade the following season.

In 1959 with only a handful of first grade appearances, Gasnier demonstrated his blistering pace and uncanny anticipation. So impressive was Gasnier, after just five first grade games, he was selected to play for New South Wales, scoring three tries on debut. This hurtled Gasnier into the Australian Test team for the three game series against the touring New Zealand and by the end of 1959 he had played more games for Australia than he had for St George.

In the second Test he scored three tries and had a hand in another five as Australia and Gasnier mauled the New Zealanders. Gasnier sustained a minor injury toward the end of the 1959 season and missed St George’s premiership win, but such was the impression he had already left on the selectors (and everyone else) he was chosen to tour Great Britain and France with the 1959/60 Kangaroo’s.

His opening match on tour was against Widnes and with his very first touch of the ball he streaked away for a 60 metre run to the tryline. He followed this up with a blistering performance, scoring three tries to be Man of the Match in Australia’s 22-14 win over Great Britain at Swinton (Australia’s first Test win at that ground in six attempts). Ultimately though, Great Britain retained the Ashes by winning the next two Tests in close games.

Three years later in the first Test against the visiting British Lions Gasnier, at the age of 22 years and 28 days, Gasnier became the youngest man ever to captain Australia. The Lions were too strong for Australia and took the series 2-1, however, Gasnier dominated in the successful home series’ against South Africa and New Zealand in 1963.

Gasnier’s second Kangaroo tour of 1963/64 was arguably his best. He scored two tries in a 28-2 first Test victory at Wembley Stadium as he and centre partner Graeme Langlands ran riot. They again cut the Englishmen to pieces in the second Test, which Australia won by an incredible 50 to 12 (the match known as ‘The Swinton Massacre’) to take the Ashes.

Over the years Gasnier also played a major part in St George’s 11 year reign over the Sydney premiership. For the majority of the time he had no competition as the best rugby league centre in the world. In 1960 in his first grand final for the Dragons he scored two tries as they beat Eastern Suburbs. Gasnier then appeared in St George’s next five premiership winning teams from 1961 to 1965. He missed most of the 1966 season through a career threatening injury as the Dragons gained their 11th title in the record run. Gasnier returned to play in 1967 and he was in St George’s team which lost the final to Canterbury in 1967, ending the Dragons epic title run. What no one was to know, was that it was also the final game of Gasnier’s club career. He finished his career with the Dragons with 127 tries and 20 goals in only 129 appearances.

Gasnier returned to the Test team in 1967 against the Kiwis as captain and after a successful series was appointed as captain of his third and final Kangaroo tour. Australia retained the Ashes, but unfortunately Gasnier was cut down by a severe knee injury in the first Test against Great Britain. He did not reappear on the field until the tour reached France.

On a cold, damp day in Avignon against a French provincial team in front of a few hundred spectators, Gasnier returned to the playing arena. Tragically, his leg gave way again and he had to be carried from the field on a stretcher. In a dressing room on the far side of the world, one of Australia’s greatest ever players announced his retirement and brought the curtain down on a glorious career. Gasnier was only 28 years old.

He retired having played 36 times for Australia, scored 26 tries and captained the side eight times.

After his retirement in 1967 Gasnier became involved in the media side of rugby league, writing about and becoming involved in broadcasting the game, showing that not only did he play the game beautifully he also knew the detailed ins and outs of it.

Since his retirement he has been awarded a variety of honours. In 1989 he was made a Member of the Order of Australia (AM) for his services to rugby league, and in 2002 he was officially inducted into the Australian Rugby League Hall of Fame. Gasnier has been recognised as an ‘Immortal’ and is truly a player who only comes along once in a lifetime.