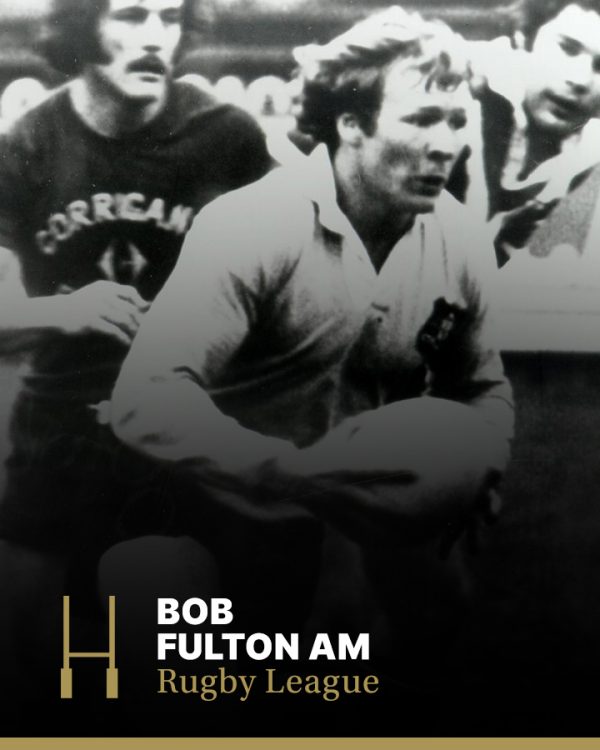 Spoken of in awed tones as one of the ‘Immortals’ of the modern rugby league era, Bob Fulton played 20 Tests for Australia, seven as captain. When the first four Immortals were named in 1981, Fulton was just two years into retirement, yet there was no question of him being named alongside Clive Churchill, Johnny Raper and Reg Gasnier.

Born in Warrington, England, Fulton was four when his parents migrated to Australia. He joined Sydney club Manly from Illawarra as an 18 year-old prodigy at the beginning of 1966.

A brilliant five-eighth/centre, he played 263 first grade matches – 213 for Manly, and 50 for Eastern Suburbs – and held the distinction of never having played reserve grade. In all, Fulton scored 129 tries for Manly – a club record – and 56 field goals, before leaving to join Easts (the Roosters) in 1977. He captain-coached Easts in 1979. Retiring as a player the same year because of a shoulder injury, he nonetheless stayed on as coach until 1982.

In the ultimate homecoming, Fulton returned to coach Manly in 1983. He led the side to premierships in 1987 and 1996, and coached successfully at international level, leading the Kangaroos to success in Great Britain, France and New Zealand in the late 1980s and well into the 1990s.

Made a Member of the Order of Australia (AM) for his services to rugby league football in 1994, Fulton was also coach of the Australian team in its successes at Wembley in 1992 and 1995. Renowned for his love of a challenge and his ability to rise to the big occasion, Fulton was remained actively involved in the game as a selector for New South Wales and Australia, and as a radio commentator up until his retirement.