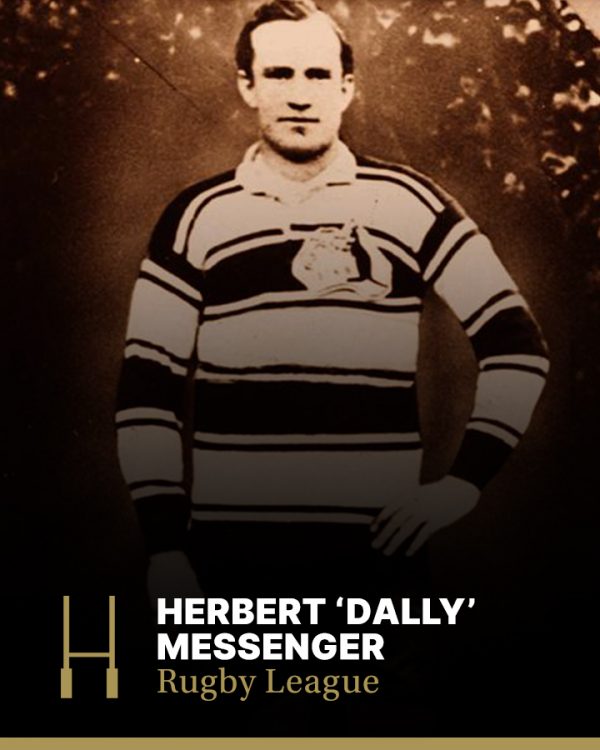 Football was Dally’s first and only sporting love and as a schoolboy he played regularly in Double Bay Park. The game was rugby union (league had not being invented yet) and after a brilliant career as a schoolboy five eighth, Messenger trialled for the Eastern Suburbs Rugby Club. The year was 1905 and Messenger was 22, old even in those days to begin a senior rugby career.

Though Messenger starred in the club’s reserve grade team in his first season club officials were hesitant about grading him in the firsts side the following season. Messenger was only 171.5cm tall and weighed barely 70kg. When he made the firsts team in 1906 Messenger was an instant sensation and gained selection in the New South Wales team against Queensland.

The following year, now a solid 76kg, Messenger played for NSW against a touring New Zealand team and against Queensland. In three representative matches he scored five tries and kicked 11 goals.

The union hierarchy decided to groom Messenger as Australia’s captain but 1907 saw the start of rugby league and professional football, and when a New Zealand league team contacted cricket great Victor Trumper to arrange some matches in Sydney on their way to play the new code in England, Trumper decided to lure Messenger away from the amateur code in the hope other top players would follow. Messenger finally accepted the terms to turn fully professional and was made captain of the Australian professional team to play a 15 a side game against New Zealand on August 17 at the Sydney Showground. Messenger scored the first try and kicked the first goal. The New Zealanders won 12-8 and much to the dismay of the rugby union body, a huge crowd turned up, most of them to watch Messenger. Such was the response that two more matches were hurriedly arranged, August 21 and August 24 -three matches in a single week!

The New Zealanders were so impressed with Messenger he was invited to join them on a trip to England, where rugby league was restricted to the north and was called the northern union code. Messenger was a sensation on tour for New Zealand and when he returned to Australia in 1908 was immediately made vice-captain of The Pioneers, the first Australian rugby league team to tour England. With five goals he almost single handedly helped Australia to a 22 all draw in the first Test against England, played at St James Park, London.

As captain in the second Test he scored a 75 yard try and converted it for Australia’s sole five points in a 5-15 defeat. Injured, he missed the third Test.

Back in Australia for the 1909 season, Messenger dominated the game. His goal kicking rose to new heights. In one club match he kicked nine goals from 10 attempts. The one he missed was kicked from inside 15 yards, inside his own half, and bounced off the crossbar.

In another match for the Eastern Suburbs club Messenger scored three tries from moves which led to the rules of the game being altered. The most important change concerned the knock on rule being introduced after Messenger deliberately punched the ball ahead past his opponents, raced through and gathered the ball on the full, to score a try.

When England toured Australia in 1910, Messenger caused another rule to be introduced when he placed the ball for an easy kick at goal, casually strolled up as if to inspect the positioning and suddenly kicked it gently ahead, caught it, and raced over for a try. That season the Queensland Rugby League suggested to the NSW body that in interstate games, Messenger should be restricted to his own half of the field!

In 1911 Messenger re-wrote the goal kicking record books, and actually agreed to play one match against Queensland and stay within his own half. That season he kicked 108 goals in 21 matches and in all, scored 279 points for the season. In the games against Queensland where he was not restricted to his own half, he scored eight tries and kicked 24 goals. Against New Zealand he scored two tries and kicked 16 goals.

He also led Eastern Suburbs to three premiership wins in 1911, 1912, and 1913, and in only six of the club matches played in 1911 did he fail to reach a double figure points tally. The same season Messenger also agreed to a frantic plea from Queensland to represent them against New Zealand. That game placed Messenger in a unique situation, although born in Sydney, and always a NSW resident, he had represented Australia, New Zealand, NSW and Queensland. He was the only player to tour with both the Kangaroos and the Kiwis, playing a total of seven Tests for Australia and three for New Zealand.

Messenger made only one Australian team trip to England, declining in 1911 because of illness in his family.

In 1913 at the height of his career, he announced he was tired of football and went to work for the City Council. When he retired from work, he lived rent free in a flat at the NSWRL headquarters in Sydney. Dally had played 140 career games and scored 998 career points, earning him the nickname “The Master”.