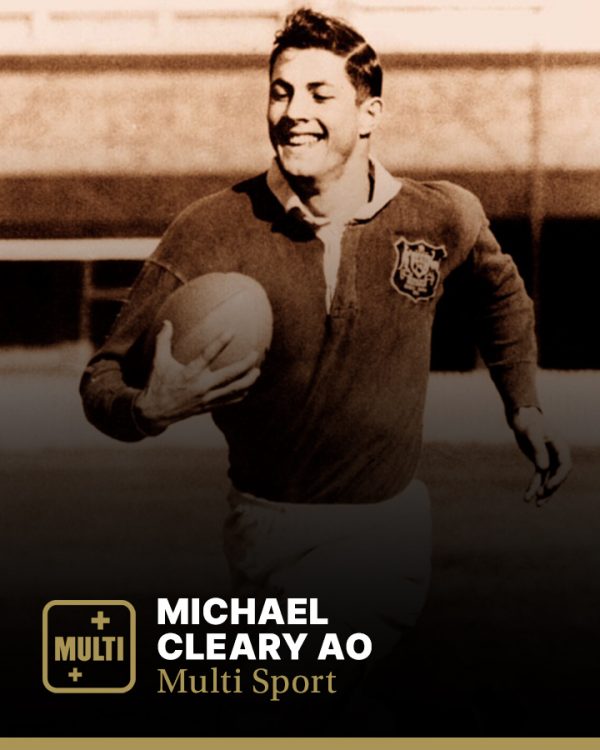 Michael Cleary AO was inducted into the Sport Australia Hall of Fame as an Athlete Member in 1999 for his contribution to the sports of rugby union, rugby league and athletics. He remains one of only four Australians who have represented their country at international level in three different sports.

During his time at school, Cleary was a record breaking athlete, setting near world record times for the 100yds event at the age of 17. Because of his outstanding sporting ability he was offered a sporting scholarship to Stanford University in California, USA, but rejected the offer as his sights were set on being selected to represent Australia at the 1960 Rome Olympic Games.

In 1959 Cleary was enticed to join the Randwick Rugby Union Club and played the following year in its winning premiership side. From there, he was selected to represent Australia against Fiji and France and made his Test debut on tour in South Africa with the Wallabies at the end of 1961. Cleary played a total of six rugby union Test matches for Australia.

Unfortunately due to illness, Cleary was unable to compete at the Rome Olympics selection trials however he competed at the 1962 Perth British Empire and Commonwealth Games, winning bronze in the 100yds sprint with a time of 9.3 seconds. Third place had been awarded to Gary Holdsworthy but television replays clearly showed that Cleary had won bronze. Because of his conduct, the Games Committee congratulated him for his sportsmanship. In 1964 Cleary defeated world professional 100yds record holder Ken Irvine in a $2000 challenge race.

Just prior to the 1962 Perth Games, he had switched to rugby league and signed a statutory declaration to the effect that he would play for the South Sydney club without payment to remain an amateur and still be eligible to run in Perth.

He represented Australia against New Zealand in 1963 and was selected for the 1963/64 Kangaroo tour of Great Britain and France. Cleary also toured New Zealand twice, in 1965 and 1969. He played five Tests and on the Kangaroo tour scored 14 tries in 20 matches. A big man, his tremendous pace made him very hard to stop and he was a prolific try scorer for Australia.

Cleary’s inspiration throughout his decorated career was always: “Results are achieved by effort”