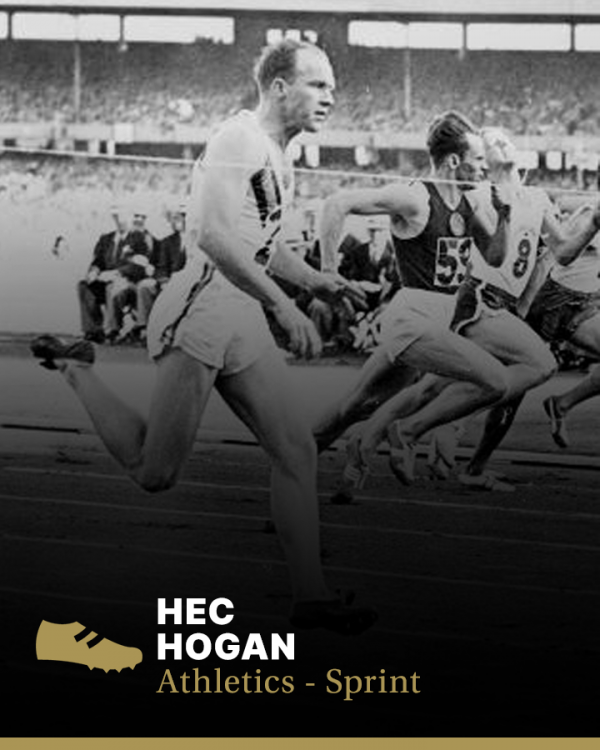 Hec Hogan was the fastest Australian runner of his time and possessed an explosive start. It was his blistering getaway from the blocks and his vigorous style that earned him the nickname ‘Hustling Hec’.

He became the first Australian since Stan Rowley in 1900 to win a medal in the 100m Olympic sprint when he finished third in 1956 in Melbourne, just one-tenth of a second behind the winner, American Bob Morrow.

Hogan, a small, chunky Queenslander, first won the Australian 100yds championship in 1952; it was the first of his seven consecutive titles over the distance. He equalled the world record with a time of 9.3 seconds for the 100yds in 1953 and later recorded 10.2 seconds for the 100m (which was inside the world record, but never recognised officially because the time was set in a handicap race).

Before the 1954 Vancouver British Empire and Commonwealth Games, he won the Australian 110yds and 220yds titles, as well as the broad jump. He also ran the last leg in the Queensland team which won the Australian sprint relay championship. Unfortunately he pulled a muscle while training for the Games and struggled to finish third in the 100yds with a time of 9.7 seconds.

At the Melbourne Olympics, he burst from the blocks in 100m to lead the Americans Morrow and Thane Baker at the halfway mark, but lost the lead to Morrow with only 15m to run and was pipped by Baker for second place as they lunged for the tape, Hogan finishing in 10.77 seconds.

Hogan represented Australia at the 1958 Cardiff British Empire and Commonwealth Games, but had lost power and performed disappointingly. The Australian 4x110yds relay team finished with bronze but his individual pursuits were unsuccessful. When he failed to qualify for the 1959 100yds championship, he announced his retirement.

In early 1960 he was admitted to hospital suffering from leukemia and died in September 1960 as the Olympic Games were being held in Rome.