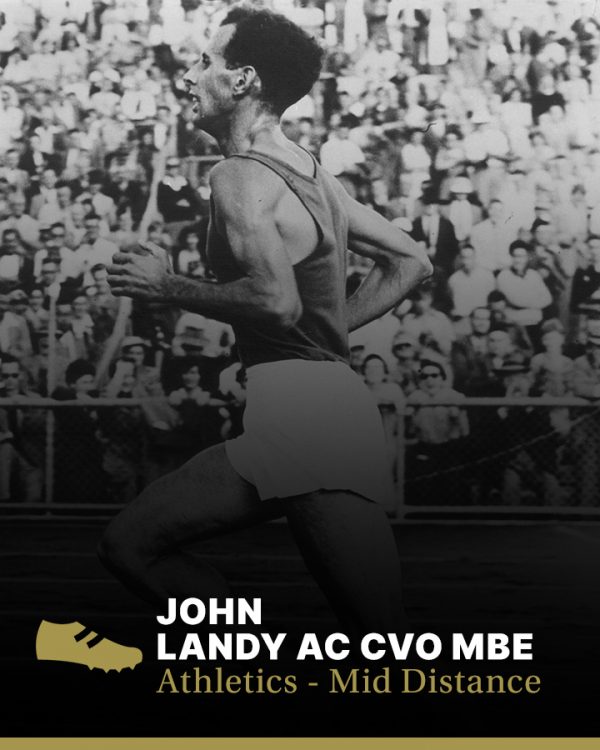 John Landy AC CVO MBE was inducted into the Sport Australia Hall of Fame in 1985 as an Athlete Member for his contribution to the sport of athletics and was elevated to Legend of Australian Sport in 2005.

Landy was the first great Australian distance runner and the second man in the world to break four minutes for the mile.

During his school years, Landy enjoyed watching 1500m track events becoming a serious runner during his college years. He was a member of the Australian Olympic team at both the 1952 Helsinki Olympics and 1956 Melbourne Olympics and he held the world records for the 1500m and the mile. Though he never won an Olympic or Commonwealth Games gold medal, he remains a legendary figure in the sport of athletics.

In early 1952, 21 year-old Landy began to attract attention in Australia with a number of promising performances in middle distance events.

Coached by Percy Cerutty from 1950, Landy improved significantly on his previous bests and it was hoped he and a small group of other improving distance runners – Don MacMillan and Les Perry – might help raise Australian standards in these events.

On January 12, 1952, at Melbourne’s Olympic Park, Landy posted a mile run of 4 min 11 seconds and also ran 3000m in 8:35 – just two seconds behind Don MacMillan’s national record. He was beaten by MacMillan in the 1952 Australian mile championship and was only selected in the 1952 Helsinki Olympic team on the condition that he pay his own way.

On tour, he clocked a 4:10 mile and a 8:54 two-mile run, but failed to impress at the Olympics, being run out of his 1500m heat after he clocked 3:57. The main benefit of his overseas tour was to introduce him to the training ideologies of international athletes and coaches and, on his return to Australia, he split from Percy Cerutty and began to develop his own training routines.

He showed the benefit of these new routines in December 1952 when he sliced nearly five seconds off the Australian record for the mile with a run of 4:02.1 – just 0.7 behind the world record. Three days after this race, he broke the national records for 1000m and 1500m in the one race.

He continued to perform at a high level throughout 1953 – running distances from 880yds to three miles (5000m) but began to feel the pressure of the media to break his record – particularly in the mile event, where the race to break the four-minute barrier was beginning to capture the attention of the world.

On December 12, 1953, in Melbourne, Landy set a new personal best and Australian mile record of 4:02 in December, equalling Roger Bannister’s Empire record, set earlier in the year. After the race, it was reported he would not compete for Australia in the 1954 Vancouver British Empire and Commonwealth Games and he predicted he would never clock a four-minute mile. Claiming to be tired of training and having very little time off, Landy said he would compete seriously until the 1954 nationals and then he would run ‘only for fun’.

At the 1954 nationals, Landy won the mile easily in 4:05.6, but was unplaced in the 880yds. Fortunately, he had changed his mind about retiring and had planned an overseas tour to challenge the four-minute mile. He arrived in Europe in early May, but on the 6th day of the month, Roger Bannister ran 3:59.4 at Oxford University, to become the first man in the world under four minutes for the mile.

Landy could not approach that time in his first few races but, with the added competition from England’s Chris Chataway in a race at Turku in Finland on June 21, Landy smashed Bannister’s world record with a phenomenal time of 3:57.9. That record held for more than three years.

The 1954 British Empire and Commonwealth Games mile was now described as the ‘Race of the Century’ and the ‘Dream Race’. The two barrier-breakers going head-to-head instead of just against the clock. The race was a classic with Landy leading all the way until he looked left in the last few hundred yards of the race, when Bannister shot past him on the right to steal the race. Landy ran his second sub-4 minute mile with the race heard over the radio by 100 million people and seen on television by millions more.

Landy accepted his defeat gracefully, saying ‘the better man won’, but it was later revealed he had run with four stitches in his foot; the result of stepping on a flash bulb in bare feet.

On his return to Australia, Landy lost motivation and slipped into retirement when he began teaching. In 1955, he gradually began to run again regaining his zest for training and competition. In early 1956, he had his first race for ten months and was only beaten by inches, over 880yds, by the American world record holder, Lon Spurrier. He then ran two sub four-minute miles – the first time the barrier had been beaten inside Australia.

In Australia, Landy is perhaps most famously remembered for his performance in the 1500m final at the 1956 Australian national championships prior to the 1956 Melbourne Olympic Games, known simply as ‘An Act of Sportsmanship‘. Landy’s phenomenal talent and admirable sportsmanship were both on display. During the mile race, a number of athletes fell in the third lap – junior 1500m world record-holder Ron Clarke amongst them. Landy stopped to check if Clarke was all right and then, after some delay, decided to chase down the leaders. It is a testament to his athletic ability that he managed to catch them all and win the race in a time of 4:04.2. This event is often considered one of the greatest moments in Australian sporting history and was voted the Finest Sporting Moment of the century at a Gala Dinner in 1999.

In great form at the championships, he also won the three mile title in a national record of 13:42.2 and, soon after the titles, sliced nearly 15 seconds off this time to claim another national record.

Landy was then persuaded to tour the United States in order to publicise the 1956 Melbourne Olympics. He ran a series of fine races, including two sub four-minute miles, but suffered injuries and muscle soreness because of the hard American tracks. These injuries prevented him from competing in the final Australian Olympic trials, but he was selected in the Australian team despite doubts about his fitness. It was no surprise to see him named to read the Olympic Oath at the Opening Ceremony.

He considered himself lucky to qualify for the final of the 1500m, even though all Australians were hoping he would win gold. Sitting back for most of the race, Landy saved his energy for one final challenge into the straight. Though he pushed himself into the bronze medal position, he could not catch the winner, Ron Delaney of Ireland.

Landy ran in some club events over the next year but finally retired from the track in 1957.

In 1955, Landy was made a Member of the Order of the British Empire (MBE) for his services to amateur athletics, and in 2001 he was made a Companion of the Order of Australia (AC) for service to research and development, increasing public awareness, and for support of community and sporting activities. On January 1, 2001, Landy was appointed as the 26th Governor of Victoria, retiring on April 7, 2006. In 2006 he was appointed a Commander of the Royal Victorian Order (CVO) as Governor of Victoria during The Queen’s visit to Australia.

On March 15, 2006, Landy was the final runner in the Queen’s Baton Relay at the Melbourne Cricket Ground during the 2006 Melbourne Commonwealth Games Opening Ceremony, presenting the Baton to the Queen.