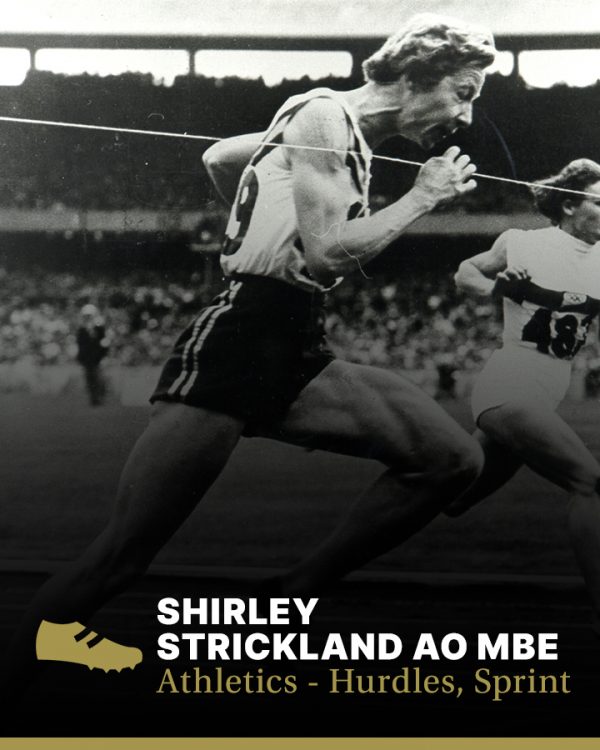 Shirley Strickland (later de la Hunty) was inducted into the Sport Australia Hall of Fame in 1985 as an Athlete Member for her contribution to the sport of athletics and was elevated to Legend of Australian Sport in 1995.

For 20 years between 1956-1976, Strickland was the only female athlete to have won seven Olympic track and field medals. This total was equaled by Irena Swezinska in 1976 and Merlene Ottey in 1996, and then exceeded when Ottey won bronze in 2000.

Strickland took up serious running in 1947 after graduating from the University of Western Australia with a Bachelor of Science in 1945 and, in 1946, won honours in physics.

Perth born and the daughter of state amateur sprint champion and 1900 Stawell Gift winner, Dave Strickland, Strickland won the national title in the 90yds hurdles in 1948, setting a world record time of 11.6 seconds, and was part of the Australian delegation to the 1948 London Olympics. There, Strickland finished third in both the 100m and 80m hurdles and won silver in the 4x100m relay, becoming the first Australian female athlete to win a track and field medal.

Strickland had never run on cinders before and had expected them to offer firm footing. With the track soft and very wet, she ended up with cakes of cinders around her shoes. The 100m final was run in blinding rain, with Fanny Blankers-Koen winning in 11.9 seconds and Strickland finishing third in 12.2 seconds. The 80m hurdles was incredibly close, with all three (Strickland, Blankers-Koen, and Britain’s Maureen Gardner) finishing in a line. Blankers-Koen was eventually judged the winner with Strickland third with a time of 11.4 seconds. Strickland ran the first leg of the 4x100m relay giving the Australian’s a six metre lead, however they couldn’t hold onto it and eventually won silver behind the Dutch. Not a bad result considering they had done very little training together. In the 200m, Strickland was placed fourth, a placing disputed by a photographic researcher years later – he placed her third. She went on to win more Olympic medals than any other Australian in track events.

After winning three gold medals at the 1950 Auckland British Empire Games (80m hurdles, 440yds medley relay, and the 660yds medley relays) and two silvers (100yds and 220yds), Strickland won her first Olympic title at the 1952 Helsinki Olympics, in the 80m hurdles, blitzing the field in world record time (10.9 seconds). In the 100m, she won bronze behind Marjorie Jackson, and an unfortunate baton mix up cost her a second gold in the 4x100m relay.

In Poland, 1955, Strickland set a new world record of 11.3 seconds for the 100m and won the 80m hurdles, and at the 1956 Melbourne Olympics, married with a three year old son, she won gold again in the 80m hurdles setting a new Olympic record of 10.7 seconds. She also won gold with the Australian 4x100m relay team (Betty Cuthbert, Strickland, Fleur Mellor, and Gloria Cooke), taking her Olympic medal tally to seven and becoming the first Australian woman to win track gold medals in the same event at consecutive Olympic Games.

After retiring she maintained her interest in sport by coaching athletes including Raelene Boyle, and was involved in athletics administration as manageress of the Australian women’s team at the 1968 Mexico and 1976 Montreal Olympics.

In 2011 Strickland was named among the inaugural inductees into the Western Australia Women’s Hall of Fame.