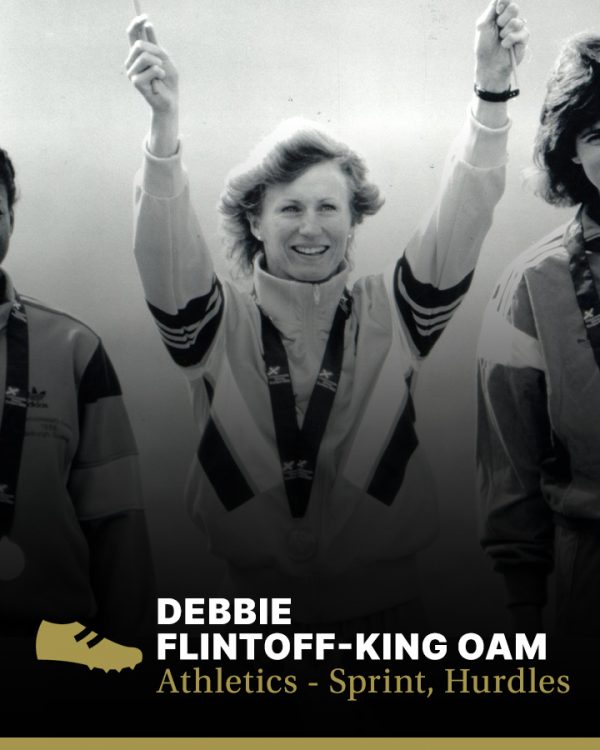 Debbie Flintoff-King completed the greatest performance of her superb athletic career when she won the 400m hurdles gold medal at the 1988 Seoul Olympic Games in an Olympic record time of 53.17 seconds; to that date the second fastest ever recorded. With that performance, she was ranked number one in the world.

Implicit in any gold medal victory are elements of courage and huge commitment. Flintoff-King transcended most of the normal boundaries, though, in her passage towards her final hurdles victory, by the tiniest sliver of a second from Russian Tatyana Ledovskaya. It was a passage which began after the 1984 Los Angeles Olympics, in which she actually fell flat on her face as the pistol sounded the start of the final of the 400m hurdles; the starter, exercising discretion and some kindness, recalled the field then, and at the second try she finished up sixth after going out far too fast, then fading from the halfway mark. She was Debbie Flintoff then, accompanied by a junior coach, Phil King, who later became her husband. She had missed out on good warm-up races, had determined to take fewer strides between hurdles, but had not had a chance to practice her new stride pattern. The first time she really attempted that pattern was in the Olympic final; her anxiety to get it right accounted for the collision between her face and the cinders, and her subsequent misjudgment of pace.

After Los Angeles the couple had a searching talk about options, even contemplating whether their Olympic opportunity might have passed. They decided finally to embark on a mission: a quest for the right blend of speed and stride pattern, one that would take them on sorties to Europe every continental summer until Seoul. And they made a pact which amounted to a joint philosophy: they would devote all their energy to winning in Seoul, but they were going to enjoy the adventure.

The 400m hurdles is a hardly demanding event, one which poses problems of arithmetic as well as athleticism. The distance between the hurdles remains constant, but the length of a runner’s paces between them varies. Early in a race, as speed develops, strides become longer, and longer strides can cause uncertainty about take-offs. The Flintoff-King technique was to take 15 strong paces between hurdles, with her left leg taking off, until a moment came -usually at hurdle six -when her stride just had to shorten. If she continued to lead with her left leg, this would normally mean a new total of 17 strides, and sometimes an upset to her rhythm. With the help of Roy Boyd, an amateur coach in Melbourne, she learned to take off with alternate legs, a practice which gave her 16 strides and a smooth over the obstacles.

During her forays into northern summers, seeking out the best available competition, Flintoff-King won the 400m flat and 400m hurdles at the 1986 Edinburgh Commonwealth Games. The dual victory in was unique in that no other athlete, male or female, had won the 400m titles over both the flat course and the hurdles. In 1987, she won silver in the world track and field titles in Rome, and became the first Australian to win at a Grand Prix series. After another successful expedition in 1988, during which she recorded the world’s fastest time of 54.02 seconds in Berne, her build up for Seoul was exactly on course. Then, in Melbourne three days before she was due to depart with the Australian team of the Games, Phil conveyed to her the shocking news that her older sister Noeline had died suddenly on the Gold Coast. She decided to go ahead with a time trial arranged for the following day, and after it she and Phil flew to Queensland for the funeral. The next day they left Sydney for Seoul.

Her composure during the countdown to her appointment on the track was remarkable. She coped not only with the grief, which she shared quietly with her husband, but also with an infection that bothered her for two weeks, causing swollen glands in her throat. She did it mainly by meditation, by going through a routine of yoga exercises, by taking massive doses of vitamin c, and by listening to takes prepared for her by Dr Ian Gawler, a brave man who ran a cancer clinic in Melbourne and had refused to submit to his own cancer, even after it caused the amputation of his right leg. She and King brought with them from their home on Victoria’s Peninsula their own mix of muesli, honey, and five loaves of their own homemade bread. She did not eat breakfast in the village once.

Before her heat, semi-final, and final, Flintoff-King seemed to radiate a kind of detached but optimistic serenity. She was quite still before the race, lying in the shade while opponents paced around. She flowed with such fluid grace across the obstacles that the great Edwin Moses later described hers as the perfect race. She virtually clawed her way back after seeming to have been beaten. It may well have been the most gallant Olympic track finish ever by an Australian. She was fourth at the second last hurdle, and third, trailing the Russian Ledovskaya and the East German Ellen Fiedler at the tenth and final jump. In a desperate sprint home she surged past Fiedler, then nudged out Ledovskaya by one-hundredth of a second, dipping for the tape in the last stride. Her time was 53.17 seconds, an Olympic record.

Following her retirement, Flintoff-King was seen again on the international stage when she went on to become a torch bearer at the 2000 Sydney Olympics, carrying the torch in the final stages of its journey to the main stadium.

She was also awarded the Medal of the Order of Australia (OAM) in 1987 list for her services to athletics.