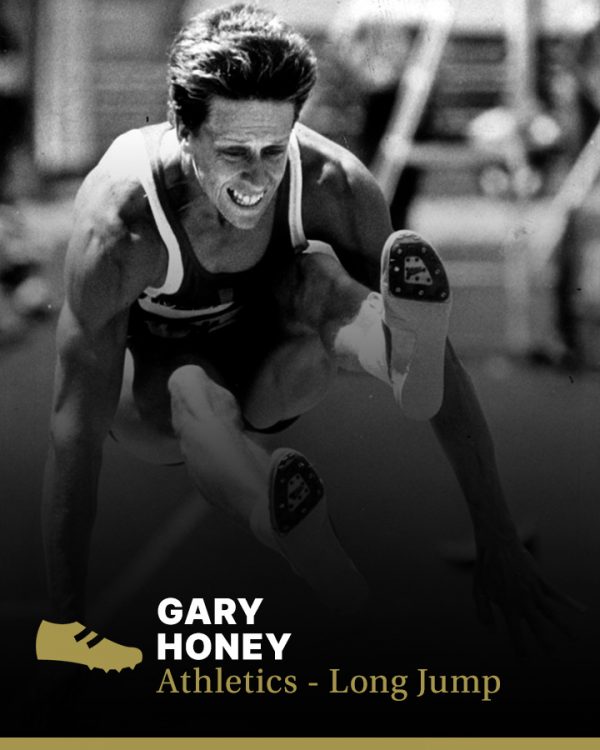 Gary Honey was inducted into the Sport Australia Hall of Fame in 2000 as an Athlete Member for his contribution to the sport of athletics.

Across a career spanning a decade from 1979 to 1990, Honey was Australia’s foremost long jumper, matching it with the king of the track, Carl Lewis for most of that time. Honey is best known for his silver at the 1984 LA Olympics where on his final jump, moved himself to second place. He also won two Commonwealth Games gold medals, in 1982 and 1986.

As a junior in the late 70’s, Honey excelled at the triple jump and the long jump before focusing his attention mostly on the long jump. In his first international open competition at the 1979 World Cup, he finished 5th of eight with 7.72m. The following year at the 1980 Moscow Olympics he finished 23rd of 34 but his best results were still to come. At the 1981 World Cup, he finished second to Lewis with 8.11m and followed this with gold at the 1982 Brisbane Commonwealth Games with a new Games record of 8.13m.

But it wasn’t until 1984, that Honey made his mark on the international long jump scene. Competing against Lewis, arguably the greatest athlete of that era, Honey won silver after an exceptional final jump. By the time they lined up for their last jumps, Honey was third behind Giovanni Evangelisti who had just surged up the placings. Lewis was 8.52m, Evangelisti was 8.24m and Honey had jumped 8.18m. On the last jump, Honey finished with 8.24m and beat Evangelisti on a count back.

At the 1985 World Cup, Honey narrowly missed a medal, finishing fourth with 7.98m. Then, at the 1986 Edinburgh Commonwealth Games, Honey defended his title with a jump of 8.08m. At his third Olympics, the 1988 Seoul Games, he captained the Australian athletics team but withdrew from the long jump.

Since retirement from the track, Honey has built a successful financial services business, dealing mainly in insurance. He has also dabbled in media work and speaking engagements.