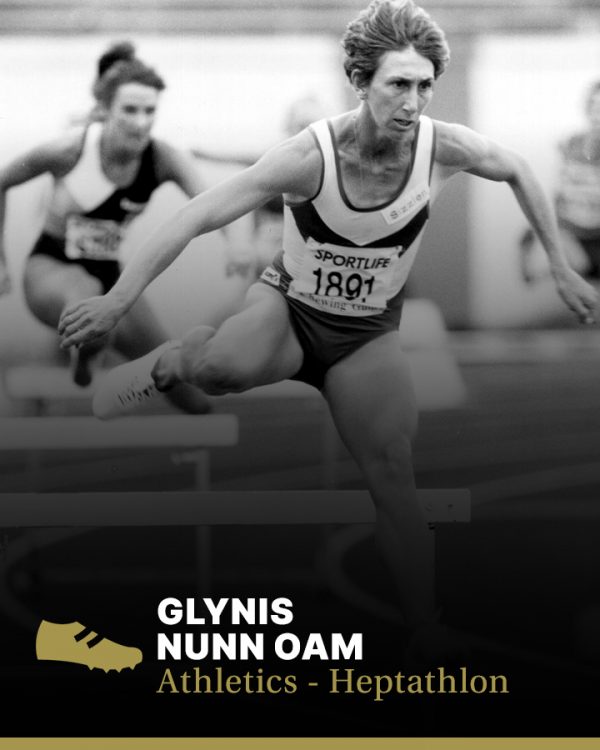 Glynis Nunn OAM was inducted into the Sport Australia Hall of Fame in 1985 as an Athlete Member for her contribution to the sport of athletics.

Nunn’s victory in the new seven-event discipline, the heptathlon, was the first by an Australian in track and field for sixteen years, since the 1968 Mexico City Olympics. She also has the distinction of winning the first women’s heptathlon in Olympic Games competition and is the only Australian to have won an Olympic multi-discipline athletics event.

Before leaving for the boycott-affected 1984 Los Angeles Olympic Games, she and her coach, John Daly, had decided that this would be her last heptathlon. She loved teaching too much to be a full time athlete. Nunn quit her job as a physical education teacher a year before the Games, after finishing seventh in the world heptathlon championship in Helsinki. The place getters then were three East German women, all of them subsidised by the state to devote their time to athletic preparation. For three months afterwards Nunn went on the dole, which served as an unconventional equivalent to the East German scheme, allowing her to train without the distraction of having to earn a living. She felt uncomfortable, though -“I’m not a dole kind of person.” -and found a part-time job in a sports goods store.

She had been competing in athletics since the age of nine. She had always been an all rounder, representing her state in basketball and her district in netball, and she distributed her talents around the athletics track. She competed in her first national championships at the age of twelve, running in an under fifteen cross-country event, and by the time she was thirteen she was regularly winning many interclub events in Toowoomba. In October 1975 she won six titles and broke five records at the Queensland state secondary schools’ sports, hurdling, sprinting and jumping.

Obviously the event that beckoned her was one that offered the prospect of allowing her to indulge her capacity for diverse performance, the five-event pentathlon. She won the national senior title in 1978 while still a junior and by 1982, when the pentathlon had been enlarged by two events to become the heptathlon, she was both Australian champion and winner of the 1982 Brisbane Commonwealth Games gold medal.

The pentathlon had taken its place in Olympic competition in 1964, as a mix of 100m hurdles, high jump, shot put, broad jump (long jump) and 800m run. For the heptathlon, a javelin throw and a 200m run were added. Glynis’ favourite events were the hurdles and the long jump and she hated the javelin and the 800m. The later event bugged her the most, she could not overcome a barrier in her mind which objected to the notion of crossing the finishing line once, then going around the track again.

Ironically, it was the 800m that gave Nunn gold over America’s Jackie Joyner. By the final event, Joyner was leading the field, but vulnerable. Nunn was within 31 points of her and Daly calculated that she needed to win by around 2.5 seconds to take gold. She beat the American by 2.46 seconds, and she and Daly were uncertain afterwards whether she had assembled enough points to win. The agonising wait for the judge’s verdict took 20 minutes but she made it, winning by just five points. Her 6,390 points was a Commonwealth record. Nunn also finished seventh in the long jump with a jump of 6.53m, and fifth in the 100m hurdles with a time of 13.2 seconds.

She competed in the 1985 World Cup, finishing fifth in the hurdles before retiring.