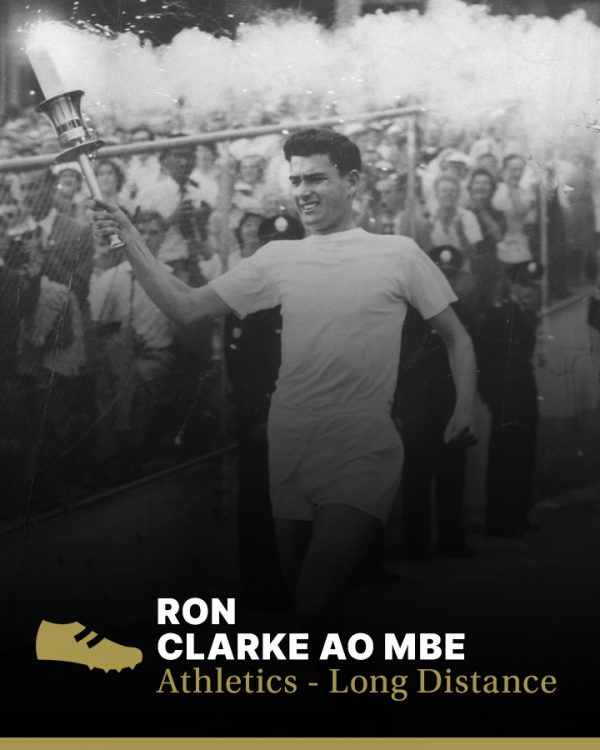 Ron Clarke was inducted into the Sport Australia Hall of Fame in 1985 as an Athlete Member and was Elevated as a Legend of Australian Sport in 2022 for his contribution to the sport of athletics.

Ron Clarke was one of the world’s greatest distance runners, etching his name into Australian sporting history with his record-breaking achievements, his fierce determination and his grace and humility on and off the track.

He broke 17 official world records in a remarkable career, holding every world record from two miles to the one-hour run across seven years.

He competed in two Olympic Games and three Commonwealth Games, for a bronze medal (Tokyo, 1964) and four silvers (Perth, 1962, two at Kingston, 1966, and Edinburgh, 1970).
Clarke’s dominance did not yield the Olympic gold medal which had seemed his destiny, but his sixth in Mexico City would prove one of the Games’ most courageous if distressing moments.

It is almost inexplicable – and a cruel reality – that Ron Clarke never won an Olympic Gold Medal, given the imposing shadow he cast over distance running for so many years.
But Clarke was at least presented with one … and the reasons behind this generous gift provide a telling insight into not only his influence on the track, but also the respect he garnered off it.

It came in 1968, the year he was denied a gold medal that had long seemed his destiny.
At the Mexico City Olympics, Clarke started as gold medal favourite in the 10,000m, but the dangerously thin air in the high-altitude conditions not only cost him any chance of success, it almost cost him his life, distance runners rely on oxygen transport to produce energy and being more than 2,200m above sea level Mexico City’s air was thin. He would say: “I died after it, my heart stopped for a few beats.”

His determined pursuit of a medal pushed him on, even when his body was willing him to stop. He kept running, even when the chance of a medal was gone, his lungs gasping for breath.

Clarke finished sixth, collapsing as he fell over the line. The image of Australian team doctor Brian Corrigan with a hand held to his head in despair while administering oxygen to the collapsed Clarke remains one of the most distressing in the history of the Olympic Games.
As former English Olympic champion and journalist Chris Brasher said: “I am angry because I hear the knockers at work already – the men who are saying Ron Clarke cannot win the big event. He never stood a chance. He gave his heart, he dredged his last ounce of courage from his soul and yet it was still not enough. Even in defeat, it was Ron Clarke’s day.”
It wouldn’t be until years later that Clarke would find out about the damage that had been done to his heart.

His good friend Emil Zatopek – a four-time Olympic champion – invited Clarke to his native Czechoslovakia late in 1968. Zatopek presented Clarke with a box when they parted with the instruction not to open it until he was on the plane. It turned out to be one of his 1952 golds.
Zatopek’s accompanying note summed up what the world already knew: “Not out of friendship but because you deserve it.”

The sentiment could hardly have been more apt as Clarke dominated distance running for more than a decade, breaking 17 world records, including 12 in an extraordinary 44-day tour of Europe in 1965. Clarke had set another two world best times, but these were not ratified to be world records at the time.

During his flurry of races in 1965 two significant performances stood out, in London when he became the first man to run three miles under 13 minutes and then four days later in Oslo taking 36.2 seconds off the 10,000m world record.

The French Academy of Sport selected him as their World Sportsman of the Year in 1966, the same year in which he was made a Member of the Order of the British Empire (MBE) for his services to athletics.

From 1965 to 1972, Clarke held every world record from the two miles to the one hour run, a feat that no athlete had ever matched. He also improved marks for the main two distances – the 5000m and 10,000m – by greater margins than had ever been achieved before.

Born in Melbourne, educated at Melbourne High School, and with his brother Jack playing for Essendon in the Victorian Football League, Clarke’s story had many local connections.
He broke the world junior mile and two-mile records in 1955, and was involved the following year in two of the significant, seminal moments in Australian sporting history.

During the Australian Mile National Championships in 1956, Clarke tripped over in an incident involving fellow Australian, John Landy. Landy stopped briefly to check Clarke’s condition before he re-joined the race and stormed home to win.

It was a moment of sportsmanship and selflessness from Landy now immortalised in a statue that sits at Melbourne’s Olympic Park.

Later that year Clarke, 19, was chosen by Melbourne Olympic officials as the rising athletic talent to light the cauldron at the 1956 Games.

Wearing a white t-shirt and shorts he had once worn for Essendon under 19s, he ignored the designed-for-television sparks of the Olympic torch that singed his arms and shirt before lighting the flame for the ‘Friendly Games’.

Clarke broke his first world record mark in Melbourne on December 18, 1963, breaking the six mile and 10,000m marks in one race.

He competed in three Commonwealth Games – Perth in 1962, Kingston in 1966 and Edinburgh in 1970, winning a total of four silver medals.

He represented Australia in two Olympic Games – Tokyo in 1964 and Mexico City in 1968.

In 2013 he was appointed an Officer of the Order of Australia (AO) “for distinguished service to the community through a range of leadership roles with local government and philanthropic organisations, and to the promotion of athletics.”

He also held the position of Mayor of the Gold Coast City Council.