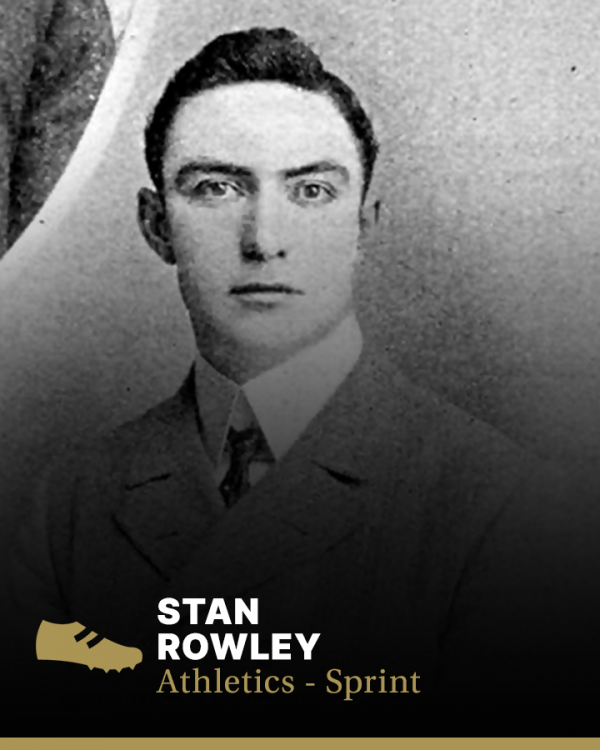 Rowley won four medals at the 1900 Paris Olympics, three bronze for Australia and one gold for Great Britain and Ireland, making him the first Australian to win a track sprint medal at the Olympic Games and the only Olympian in history to win medals for two different countries at the same Olympics.

There were three Australasian representatives at the Games, swimmer Freddy Lane, shooter Donald Mackintosh, and Rowley. After money raising efforts in NSW and Victoria, Rowley was able to make his way to Paris on the P & O liner ‘Australia’.

Starting in the short sprint events, he won bronze in the 60m, 100m and 200m events. Rowley had never raced over 100m prior to the Games and after finishing second in the semi-final behind Arthur Duffey, he had to go through a repechage, which he won in 11.0 seconds. In the final, Rowley was unable to match this time and finished in 11.2 seconds to win bronze behind John Tewksbury, who ran in 11.1 seconds. The 60m race saw him finish in 7.2 seconds, less than half a metre behind gold medal winner Alvin Kraenzlein and John Tewksbury. Rowley and Tewksbury would meet one final time, in the 200m. Rowley managed to beat his rival in the heats, but Tewksbury won the final by a clear margin. Rowley, who finished in 22.9 seconds received his third bronze medal.

Once Rowley had finished his sprint program, he was asked by English friends to join their 5000m cross country team because they were a man short. They had confidence that they could win regardless of how well the fifth runner performed. Because Olympic rules were very flexible at the time and despite the fact that he had no experience in longer races, he became their fifth team member.

The event was held on Sunday July 22, and the Americans withdrew because they objected to competing on the Sabbath. This left two contenders, France and Britain, and without Rowley the result would have been a walkover for France. In this event (discontinued after 1900), each finishing place represented a point, and the team with the lower total of points was judged the winner.

After British runners finished first, second, sixth, and seventh, it was clear that England would win -even if Rowley finished tenth. It’s total was 26 and the French total was 29. He ran for a lap, then started to walk. Although the performance has since qualified Rowley, in the view of the IOC, as having achieved gold medal status, he refused to take it seriously. In a letter written home: “…I could run, walk, roll, or do anything I like as long as I finished… the spectators would cheer me in fun every time I passed the grandstand, where I would stop and bow politely, raise my cap, have some refreshment and resume my march amid the laughter of the French spectators… finally they allowed me to stop, seeing I could only get last place.”

After retiring from competitive running Rowley served as the treasurer of the Amateur Athletics Union of Australasia from 1908 until 1924 and was the NSW delegate to the AAU on a number of occasions. He worked in the stock and pastoral industry in Sydney until his death.