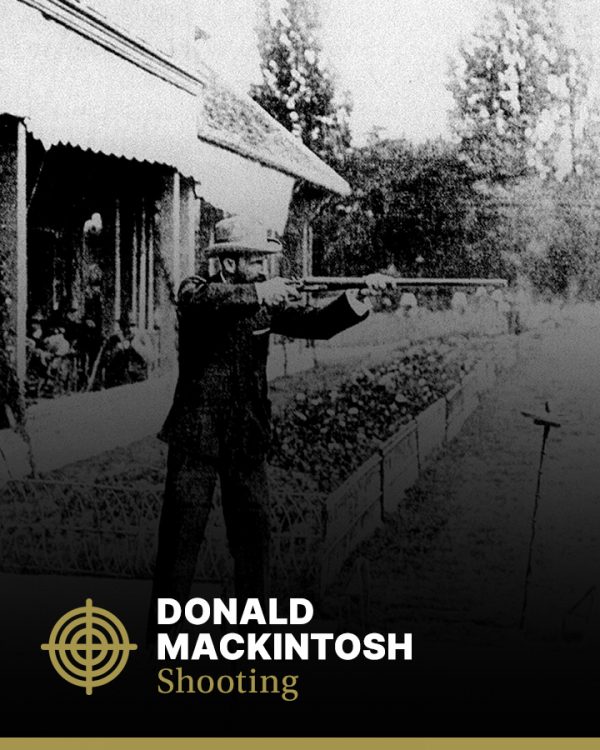 Donald Mackintosh started shooting rabbits and hares not long after he first attended primary school, going after them with a flask of black power, a few pounds of lead and an ancient muzzle loader. He joined the Bacchus Marsh Shooting Club at the age of 10, and soon established himself as a fine shot. At 23 he was a member of Melbourne Gun Club, and within six months was placed on the most difficult handicap, 30yds. In 25 years of competitive shooting he never moved closer to the target in handicap events.

Australia had three representatives at the 1900 Paris Olympic Games, Fred Lane (swimming), Stan Rowley (athletics) and Mackintosh and they shared much success. The IOC now accords all three of them symbolic gold medal status, even though the Olympic gold medal did not arrive until 1904.

Mackintosh was by then travelling around the Continent on a circuit that embraced France, Belgium, Spain, and Italy. In some ways he was unusual for a sportsman, in that he was an educated man who wrote poetry, but the most astonishing fact about him was that he was completely blind in the left eye.

That June, accompanied by his wife, he happened to be in Paris for the Paris Exhibition pigeon shooting. Earlier on the same tour he had been successful in the Grand Prix du Casino at Monte Carlo, one of the most prestigious events of all.

Mackintosh was, in a sense, a casualty of the confusion that marred the Paris Games. Acclaimed in his prime as the finest shot in the world, he went to Paris for a day of live pigeon shooting organised by the Paris Exhibition for June 25. Like many competitors in an assortment of sports, he did not realise that he was involved in the Olympic Games. He won one event, the Prix Centenaire de Paris, and tied for third in another, the Grand Prix de l’Exposition. In both events Mackintosh shot at live birds, killing 22 pigeons from 22 shots for his victory and 18 pigeons for his third place. He collected more that 7500 francs (£300) and a medal to add to his vast assembly of trophies, and headed off to shoot in other parts of the Continent.

During his lifetime Mackintosh was never listed as an Olympic medallist but in 1987, the IOC declared that Mackintosh had won gold and bronze medals at the 1900 Olympics however these are not counted as official medals towards Australia’s tally..