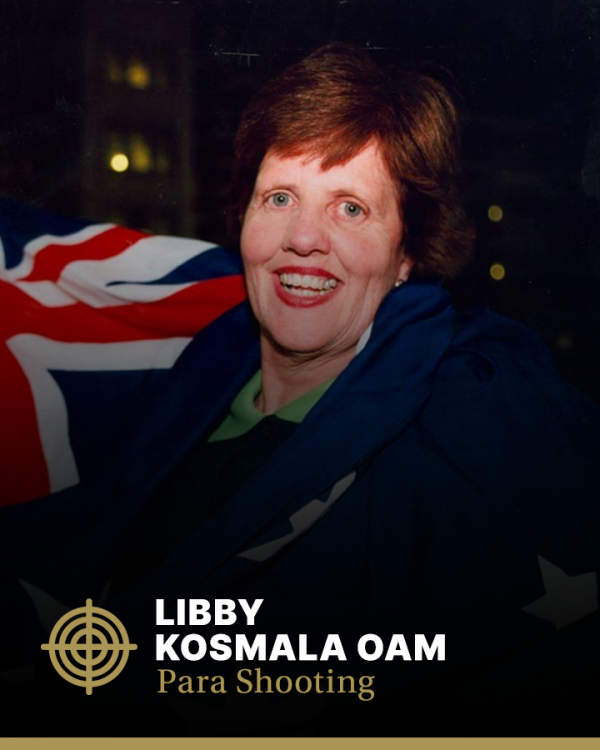 Libby Kosmala OAM was inducted into the Sport Australia Hall of Fame in 2021 as an Athlete Member for her contribution to the sport of shooting.

Libby Kosmala is among the most respected figures in Paralympic history. She was born a paraplegic which was initially classified as spina bifida. She wouldn’t find out until she was 50 that it had been caused by a complication at birth. Her spinal cord is of normal thickness down to the middle of her back, but it thins in part to the size of a lead in a pencil.

In the early Sixties, Kosmala became involved in wheelchair sports as an administrator providing opportunities to others. By 1966, she was competing herself and participated at the National Wheelchair Games in multiple events, including foil fencing, archery and swimming. Despite her success at the National Wheelchair Games, Kosmala missed out on representing Australia as an athlete at the Tel Aviv 1968 Paralympic Games. Instead, she attended as the Australian team secretary at what was the 17th International Stoke Mandeville Games, the competition which ultimately became the third Paralympics.

Two years later, Kosmala started her Australian representative journey as an athlete. At the Edinburgh 1970 Commonwealth Paraplegic Games, she was urged to compete in multiple sports which provided a bounty of two gold medals for archery and fencing, a silver for pentathlon (which involved wheelchair racing, swimming, discus, javelin and archery), and four bronze medals across wheelchair racing and swimming. Kosmala made her Paralympic Games debut in Heidelberg, Germany, in 1972, competing in athletics and swimming. She took home a swimming gold medal in the 3x50m Medley Relay 2-4 event.

An invitational trip to a rifle range resulted in Kosmala finding her true passion as well as her skill in a target sport. She surprised the invitee – an able-bodied shooter – by continually hitting the target. After some initial reluctance, she took on this new-found sport and excelled, leading to even more success.

Kosmala attended the Toronto 1976 Paralympic Games, where shooting was included for the first time. Her chosen events were archery, dartchery (women’s pairs in an event combining darts and archery) and shooting (mixed event). Libby took out the gold medal in the mixed rifle shooting 2-5 event. The Soviet Union refused to host the 1980 Paralympic Games, even releasing a statement denying the country had any disabled people, so the event was held in Arnhem in the Netherlands. Kosmala was one of three shooters competing in the mixed disciplines, where she won gold in the mixed air rifle prone 2-5 and silver in both the mixed air rifle 3 positions 2-5 and mixed air rifle kneeling 2-5.

While Kosmala competed at the following seven Paralympics – Barcelona 1992, Atlanta 1996, Sydney 2000, Athens 2004, Beijing 2008, London 2012 and Rio 2016 – she took on a more mentoring role. Although she didn’t win a medal at any of these games, she still made a significant impact. At the 1996 Atlanta Paralympic Games she carried the Australian flag at the opening ceremony, at the 2000 Sydney Paralympic Games she competed against her husband (finishing ahead of him), and at the 2008 Beijing Paralympic Games she narrowly missed out on a medal in the women’s air rifle standing SH1 event as Australia’s oldest representative.

Four years later, at the 2012 London Paralympic Games, Kosmala made history as the oldest Paralympian to ever compete, having just turned 70. Incredibly, she attended her 12th and final Paralympics at the 2016 Rio Paralympic Games before announcing her retirement from the sport of shooting in 2020.

After her athletic retirement, Kosmala continued to be an advocate for disability rights and mentoring the next generation of Australian shooters.