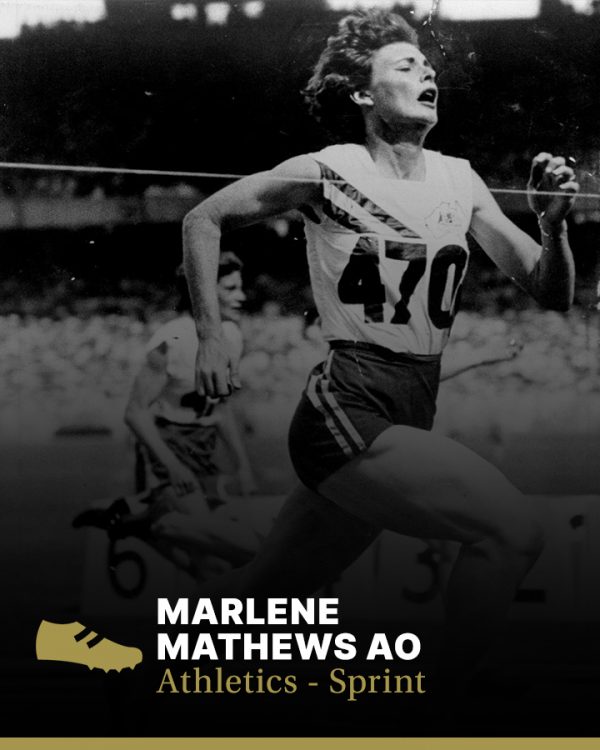 Marlene Mathews ran with distinction in the golden era of Australian women’s sprinting throughout the 1950s and early 1960s. It was a time that, as well as Mathews, also produced Marjorie Jackson, Betty Cuthbert and Shirley Strickland (de la Hunty) as dominant figures of the track.

But for injuries, there is no doubt that Mathews would have competed in all major competitions from 1952 to 1960. As an 18 year-old in 1952, Mathews was a certain selection for the Helsinki Olympics until a leg injury forced her out of the competition. Selected for the 1954 Vancouver British Empire and Commonwealth Games, she suffered further injury and had to withdraw from both sprints.

Her first Olympic Games appearance was at the 1956 Melbourne Games, where she finished third in both the 100m and 200m. However, although this achievement made her the third fastest woman in the world behind Cuthbert and Germany’s Christa Stubnick, she was controversially left out of Australia’s gold medal winning relay team. However, at a post-Olympics meeting, she was part of the relay team that broke the 4x220yds and 4x200m relay world records.

At the 1958 Cardiff British Empire and Commonwealth Games, Mathews set the pace, winning gold in the 100yds and 220yds and winning silver as a member of the 4x110yds relay team.

Mathews also competed in the 1960 Rome Olympics, before eventually turning to sports administration. In 1972, she was an Assistant Manager of the Australian Olympic Team that went to the Munich Olympics.

In 1999 Mathews was made an Officer of the Order of Australia (AO) for service to athletics and sports administration, particularly through the Australian track and field coaches association, and to the community.