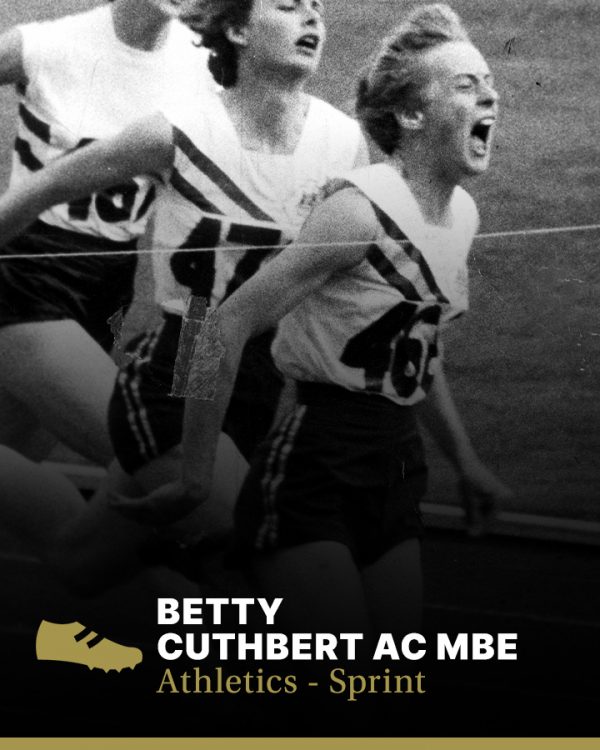 Betty Cuthbert AC MBE was inducted into the Sport Australia Hall of Fame in 1985 as an Athlete Member for her contribution to the sport of athletics and was elevated as a  Legend of Australian Sport in 1994.

Cuthbert was the true ‘Golden Girl’ of Australian track and field. She won four Olympic gold medals, three in Melbourne in 1956, and the fourth, eight years later in Tokyo in 1964.

The progress towards Melbourne gold began when she was eight and living in Ermington near Parramatta. She was persuaded to join the Western Suburbs Athletic Club by June Ferguson, a teacher at her school and coach at the club.

Rather than changing Cuthbert’s natural style, June made it work better by concentrating on driving forward and getting a better start. June also worked on her concentration and used to say, “if you had time to think over 100yds you weren’t going fast enough”. She was never taught a finish, in the belief that she should be in full flight when breaking the tape, therefore she would aim for a yard beyond the tape before slowing down.

On September 16, 1956, in a race that she was persuaded by her mother to contest, Cuthbert shocked herself and June by breaking the world 200m record with a time of 23.2 seconds. But so unconfident was she that she would be selected into the Olympic team, she bought tickets to attend the Games as a spectator.

At the Olympic trials the following month, Cuthbert showed just how perfectly her preparation had been, peaking to win both the 100m (and beating Marlene Mathews over that distance for the first time) and the 200m. A week later she was chosen for the team, and was able to give the tickets she had bought to her brother John.

At the Games, Cuthbert and Mathews both won their heats, Cuthbert clocking a new world record of 11.4 seconds. In the semi-final later that same day, her concentration lapsed momentarily and was beaten into second by German Christina Stubnick.

In the final, with her mouth agape, Cuthbert surged down the track to win in 11.5 seconds, winning Australia’s first gold medal of the Games.

Later in the week, Cuthbert contested the 200m. Having recently set the world record in the distance and having just won the 100m final, she was full of confidence. She got away fast, clearing the way to another gold medal and equalling Marjorie Jackson’s Olympic record of 23.4 seconds.

Australia was favourite for the 4x100m relay and the final team consisted of Cuthbert, Shirley Strickland, Fleur Mellor, and Norma Croker. The team performed magnificently, creating a new world record of 44.9 seconds in the heat, then broke the record again to win the final from Great Britain in 44.5 seconds. This made Cuthbert the first Australian, male or female, ever to win three gold medals at a single Olympics.

Cuthbert competed at the 1958 Cardiff British Empire and Commonwealth Games and won two silver medals, in the 220yds and the 4x110yds relay.

Cuthbert had a torn hamstring before the 1960 Rome Olympic Games and as a consequence, she failed to survive the second round of the 100m, and was forced to withdraw from the 200m. Neither the injury nor the failure in Rome influenced her decision to retire as much as her hatred of being a public figure. After Rome she retired to the peace and quiet of her father’s nursery.

Eighteen months later, the idea of making a comeback entered her mind. She tried to push it away but the urge became more insistent. She finally gave in and took advice from June Ferguson again, who suggested she try the 400m. She spent some time with Percy Cerutty at Portsea, improving her endurance, then began an intensive training program under Ferguson’s guidance. She competed at the 1962 Perth British Empire and Commonwealth Games, winning gold in the 4x110yds relay.

Cuthbert broke two 440yds world records in March 1963, but was hampered in the 1963/64 season by an injury to her right foot. She was beaten at the 1964 national championships but finally won at the distance at the Olympic fundraising carnival.

At the 1964 Tokyo Olympics, Cuthbert ran just well enough in the heat of the 400m to qualify for the semi-finals. In the draw for the final, she received the lane she wanted, number two, with most of her opposition across the track outside her. She started explosively, passing her Australian teammate Judy Amoore (Pollock). Over the last 100m, she drew on all her reserves, and all her sprinting capacity winning the race in 52.01 seconds.

Drained of all incentive, Cuthbert retired from international competition after the Games. In domestic competition, she won three national titles, the 220yds in 1955/56 and 1959/60 and the 440yds in 1962/63

In the 1970s, Cuthbert was diagnosed with multiple sclerosis and began actively campaigning for research funds for the Multiple Sclerosis Society. To complete a magnificent career, she was one of the final torch bearers in the opening ceremony of the 2000 Sydney Olympic Games.

1956: Winner of the Helms Award (World Trophy for Australasia)
1956: Winner of the ABC Sportsperson of the Year
1965: Made a Member of the British Empire (MBE)
1978: Became the first female Trustee of the Sydney Cricket Ground Trust
1983: Received an Olympic Honour (Silver)
1984: Made a Member of the Order of Australia (AM)
1992: RiverCat ferry on Sydney Harbour named in her honour
1998: Named a National Living Treasure by the National Trust of Australia
2000: Named as inaugural Inductee of the Athletics Australia Hall of Fame
2000: Received the Australian Sports Medal
2000: Made a Life Member of the Sydney Cricket and Sports Ground Trust
2001: Inducted into the Sydney Cricket and Sports Ground Trust Walk of Honour
2001: Named on the Victorian Honour Roll of Women
2007: Named a NSW Hall of Champions Legend
2012: Named as an inaugural Inductee of the IAAF Hall of Fame
2017: Inducted into he Australian Women’s Health Awards Hall of Fame
2018: Named a Companion of the Order of Australia (AC)