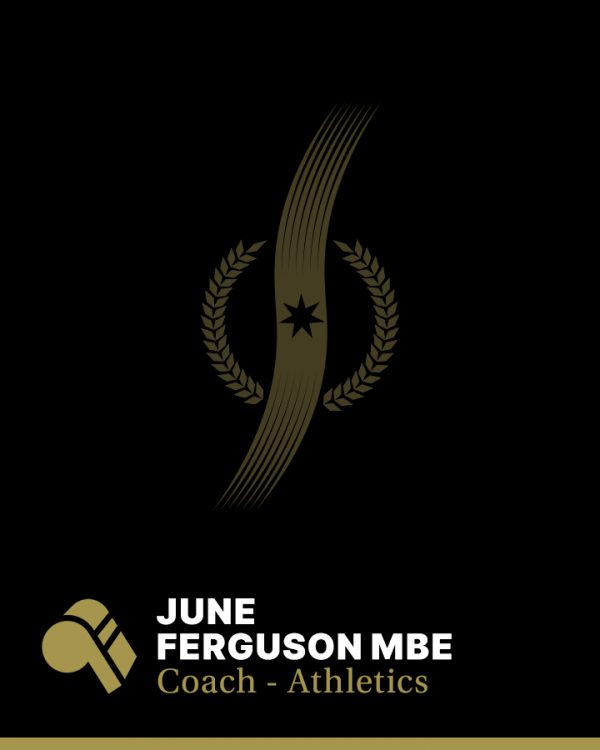 June Ferguson (nee Maston) was a natural and all round athlete but was particularly successful in long jump and sprinting and for three successive years from 1946 to 1948 she won the New South Wales 440yds title.

In 1948, at the age of 20, Ferguson was selected to represent Australia at the Olympic Games in London in the long jump and 4x100m relay. The relay team was made up of Shirley Strickland, Joyce King, Betty McKinnon with Ferguson running the second leg. This was the first women’s relay team to represent Australia and they were successful in winning silver behind the Netherlands with Canada third.

Ferguson’s interest turned towards coaching in the early 50s, and while teaching physical education at Parramatta Home Science School she came across a young athlete named Betty Cuthbert. So began a relationship that, over the next 12 years, was to re-write five world records, win four Olympic gold medals, and establish itself in the history of Australian sport.

Many young athletes sought Ferguson expertise in coaching and in 1957 she decided to form her own club located near where she lived in Epping. Cumberland Women’s Amateur Athletic Club was formed and over the next two decades proved to be one of the most successful clubs in Australia under her guidance both as the initial president and as club coach until her retirement in 1988.

Throughout these years Ferguson not only became an outstanding coach, she also broadcast for the ABC for more than ten years, was a sports writer for the ‘Sydney Daily Telegraph’, lectured at the Sydney Institute of Education and was involved in founding Coach Education in Australia.

Ferguson was ahead of her time with her innovative ideas such as the introduction of stretching regimes, blood testing, monitoring of the individual recovery rates, weight training sessions and the use of treadmills. She produced athletes at a time when women were not accepted as coaches throughout the athletic world, making her the pioneer for women in the field of coaching. She did this with successes that far outshone her male counterparts. Her results spoke for themselves with performances at the elite level with Olympians such as Cuthbert, Maureen Caird, Penny Gillies and Sandra Brown. She was instrumental in the early development of two time Olympian Darren Clarke. She also became the mentor to many young athletes who sought her advice on many subjects.

Ferguson retired from coaching on May 18, 1988 and moved to Queensland leaving behind an outstanding list of achievements. Her athletes had won/achieved: more than 200 NSW state titles, more than 30 state records, more than 60 national winners and placegetters, four Olympians, 16 world records, and five Olympic gold medals.

Ferguson will be in the Australian sporting history books forever for the contribution she made to the sport. She was outstanding, her commitment unquestionable, and along with her knowledge and application, bought about successes that are unequalled to this day in track and field.

In 1967 Ferguson became a Member of the Order of the British Empire (MBE) for her service to women’s athletics.