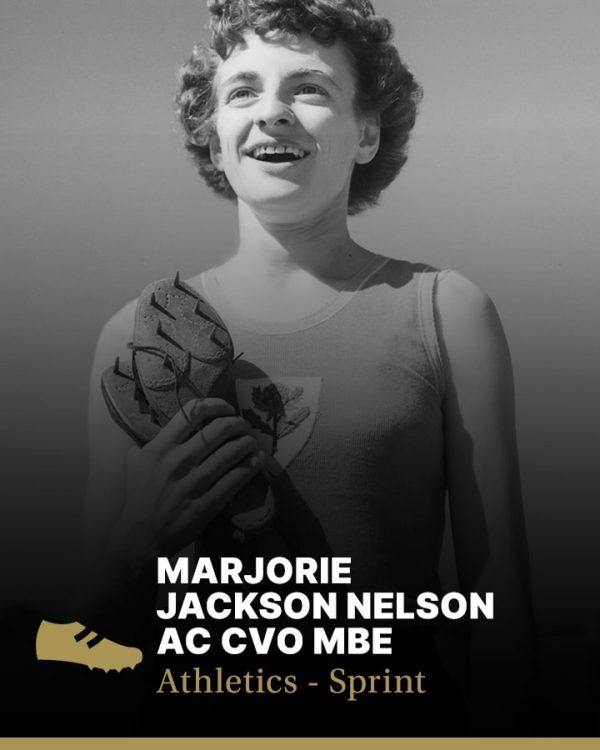 Marjorie Jackson-Nelson was inducted into the Sport Australia Hall of Fame in 1985 as an Athlete Member for her contribution to the sport of athletics, and was elevated to Legend of Australian Sport in 1995.

Jackson-Nelson first gained fame when she defeated reigning Olympic 100m and 200m champion Fanny Blankers-Koen a number of times in 1949, earning her the nickname ‘the Lithgow Flash’, after the New South Wales town where she lived. Jackson won two Olympic gold medals and seven Commonwealth Games gold medals. Between 1950 and 1954 she won every state and Australian title she contested for the 100yds, 100m, 220yds and 200m sprints (six in total). During her athletic career she broke world sprint records on ten occasions.

She won four gold medals at the 1950 Auckland British Empire Games, the 100yds (10.8 seconds), the 220yds (24.3), the 440yds medley relay (47.9), and the 660yds medley relay (1:13.4). But it was her performance at the 1952 Helsinki Olympic Games that entranced the nation. She won both the 100m (11.5) and 200m (23.7) gold medals, equalling a world record in the 100m and setting two in the 200m. It was confidently expected that she would collect another gold medal, along with other members of the women’s sprint relay team, Shirley Strickland, Winsome Cripps and Verna Johnston. They won their heat easily, setting a world record – but at the last change in the final, the baton was dropped.

In 1952 the prestigious Helms Foundation in the United States awarded her the title of Outstanding Athlete 1952. Jackson-Nelson was made a Member of the Order of the British Empire (MBE) in 1953 for her services to women’s athletics, a Companion of the Order of Australia (AC) in 2001 as Governor of South Australia, and was appointed a Commander of the Royal Victorian Order (CVO) by Her Majesty The Queen on the occasion of the Royal Visit to Adelaide in February 2002.

Jackson-Nelson was one of the eight torch-bearers of the Olympic torch at the opening ceremony of the 2000 Sydney Olympics and in 2006, was one of the final four runners who carried the Queen’s Baton around the Melbourne Cricket Ground during the 2006 Melbourne Commonwealth Games opening ceremony. In 2021 Jackson-Nelson was awarded Commonwealth Games Australia Life Membership, alongside fellow SAHOF Member, Dr Grace Bryant.