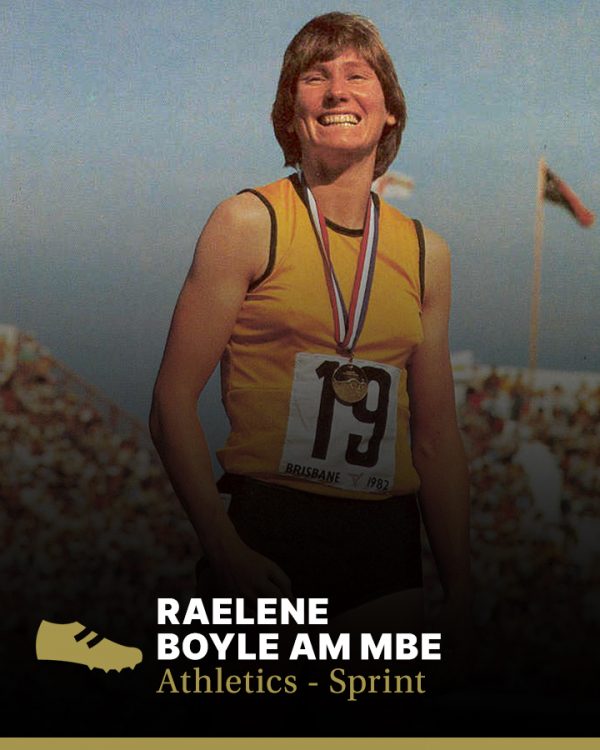 Raelene Boyle AM MBE was inducted into the Sport Australia Hall of Fame in 1985 as an Athlete Member for her contribution to the sport of Athletics and was elevated as a Legend of Australian Sport 2017.

To this day, Raelene Boyle remains one of the modern era’s greatest female sprinters – she was selected in every Australian Olympic and Commonwealth Games team between 1968 and 1982 – where she won a total of 12 medals – and reached the finals of five individual Olympic short-sprint finals where she finished second three time. On a sixth occasion she was unfortunately falsely disqualified.

A Melbourne local, Boyle first took to the international stage at the age of 16 when she won silver in the 200m at the Mexico City 1968 Olympic Games. It was during those Games that Jesse Owens, winner of four gold medals at the Berlin 1936 Olympics, watched the young Australian sprinter in action and offered the opinion: “I have not seen a girl so beautifully balanced.”
At the Munich 1972 Olympics she was beaten twice into second place by an East German athlete whose credibility was later stained by allegations that she had been part of a systematic doping program.

And four years later, in her target event at the Montreal 1976 Olympics, the 200 metres, Boyle was disqualified after being ruled guilty of two false starts. Film footage later demonstrated that she hadn’t jumped the gun in the first of them. Earlier, she had become the first Australian woman to be selected as flag bearer for the Opening Ceremony. Boyle also dominated sprinting events at the 1970 Edinburgh and 1974 Christchurch Commonwealth Games, winning gold medals in the 100m, 200m and 4x100m relay. At the 1978 Edmonton Commonwealth Games, Boyle only contested the 100m sprint due to injury, and won silver.

The controversy of the 1980 Moscow Olympics led to much indecision amongst prospective competitors, however Boyle had decided prior to withdraw from the Moscow Olympics due to personal reasons. Perhaps the greatest moment in Boyle’s career was her last competitive run at the 1982 Brisbane Commonwealth Games, which saw her win gold in the 400m. In 1974, Boyle was made a Member of the Order of the British Empire (MBE) in recognition of her service to athletics.

Throughout the 1980s and 1990s, she remained involved with sport in a variety of capacities, ranging from being a member of the Victorian State Sports Council to Assistant Manager Australian World Junior Athletics team. Diagnosed with breast cancer in 1996, she has worked assiduously since that time to raise awareness of the disease and in 2007 Boyle was awarded the Member of the Order of Australia (AM) for service to the community through a range of roles with organisations that support people with cancer, particularly Breast Cancer Network Australia.