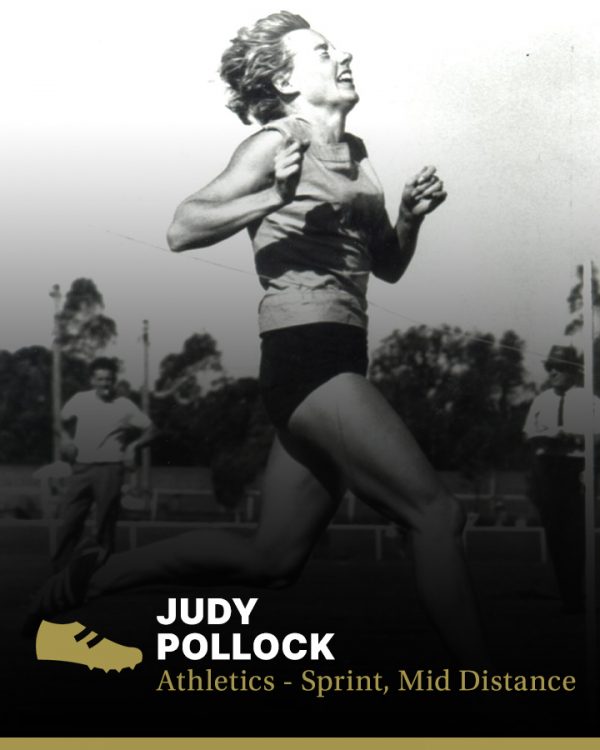 Victorian runner Judy Pollock (nee Amoore) always ranked at the top of athletics despite many lay off’s and injuries, and she is one of the finest athletes Australia has ever seen.

Pollock first attracted attention when, as a nineteen year old physical education teacher she set a string of C grade records in inter-club athletics. She appeared at the 1960 Australian championships soon after, but illness ruined her performances.

In 1963, Pollock won her first state titles, the 220yds and 440yds and repeated these wins in 1964. Although she did not win the title at the Australian championships, good performances there and at subsequent Olympic trials, saw her selected for the 1964 Tokyo Olympics, where she ran extremely well in the 400m with a time of 53.4 seconds, winning bronze behind team mate Betty Cuthbert who won gold.

In mid-1967, during a European tour, she set the world 800m record of 2:02.0 seconds in Finland equalling the world 880yds mark, but officials left her in some doubt about the record being ratified when they advised her that the competitors’ singlets, which the organisers had provided for runners, bore a word under the number that was a coffee advertisement. For a while, Judy worried less about the record than the threat that she would be declared professional. Later that year she was the recipient of the famous Helms Award for Australasia.

Judy retired from athletics to start a family but returned to training soon after and to the surprise of most critics, was within 0.4 of the Olympic qualifying standard after only two inter-club 400m runs. Early in 1972 she won the national 800m title (2:01.5 seconds) and found herself selected for the 1968 Munich Olympics.

Unfortunately, just after the Olympic trials, she sustained a calf muscle injury and for a while it seemed as though she would be forced out of the team. Extensive medical examinations finally indicated that the injury was getting better so Pollock left with the team only to find the injury returning soon after her arrival in Munich. It became so bad that she was unable to compete at the Games. She ran again in November after nearly three months off but retired again in February 1973.

At 36, Judy ran the fastest time of her career for 800m, 1:59.90 just missing a berth in the final. Also, she set an Australian record in the 1500m. She retired from international athletics in August 1976 to establish a training camp for junior athletes.