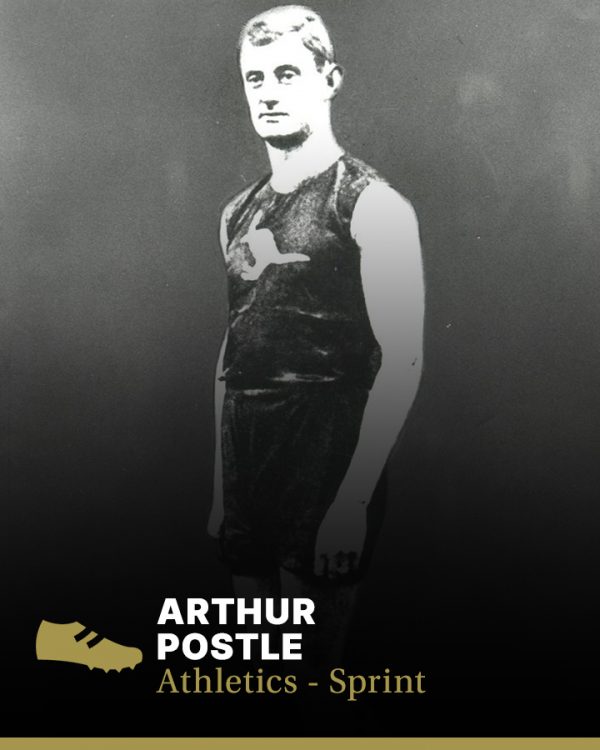 The second of nine children, Arthur Postle was educated to the fifth grade at Springside State School on the Darling Downs, Queensland, where he showed early running talent. On leaving school Postle worked on the family farm and, despite his father’s disapproval, competed successfully at professional athletics meetings around the Downs and south-east Queensland, firstly in juvenile events and, from 16, in open company. He was coached by his uncle Fred Postle, and trained on a rough running-track cut in the bush on his uncle’s adjoining property.

He left the farm in 1899 to pursue his athletic career. Although he was unsuccessful in the Stawell Gifts of 1901 and 1903 and was never to win this premier event, his name became well-known through his victories at Charters Towers and Townsville in 1904/05. He achieved world fame in his all crimson running shorts and singlet as ‘The Crimson Flash’ before a crowd of 20,000 at Kalgoorlie, Western Australia, on December 5, 1906 by defeating the Irish world champion, R. B. Day. Postle won over 75yds and 300yds and Day won over 130yds. At this time athlete Jack Todd became Postle’s trainer; they were later to marry sisters and share a lifelong friendship.

He earned the appellation of ‘The Mighty Postle’ by his defeat of the new English champion W. Growcott in England in 1908. His running career in England, Wales, Scotland, South Africa, Australia and New Zealand was highlighted by his contests with the South African Reg Walker and his rivalry with the champion Australian, Jack Donaldson (the ‘Blue Streak’). Donaldson won most encounters of 100yds or more, while Postle was virtually unbeatable over shorter distances.