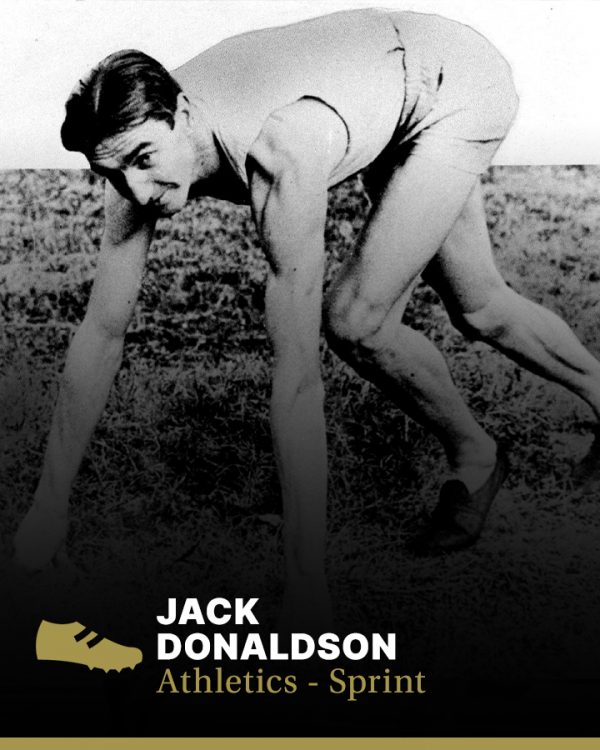 Educated at local state schools, young Jack Donaldson worked at a Kerang store and flour-mill, and trained and rode his father’s trotters before devoting himself to professional running. After some success as a schoolboy athlete Donaldson first became widely known in 1906 when he ran second in the Stawell Gift. Travelling overnight to Bendigo, he won both the 130yds (119m) and 220yds (201m) there. Over the next two years he had numerous victories at meetings in eastern Australia in spite of his rapidly increasing handicap.

Of medium stature but slight build, 175cm tall and just 65kg, he attracted notice with his long, gliding stride and high arm action. His title, ‘Blue Streak’, derived from his well-known blue singlet marked with a large white ‘A’. He set times from 1910 to 1913 which stood for up to 40 years. During his career, Donaldson broke 13 world records.

Self trained and using a natural style, Donaldson was at his best at professional distances beyond 100yds and set times which, though not electronically clocked, stamped him as the greatest natural runner the world has know. The fact that his records survived into an era of better coaching, tracks and equipment (including starting blocks) is evidence of his exceptional talent.

With his manager, E. R. (‘Mick’) Terry, Donaldson sailed for South Africa in 1909. Always a professional, Donaldson turned in some of the most remarkable times for that era. In 1910 he flashed over 100yds to win a $4000 race in Johannesburg beating America’s Charles Holway and Australia’s Arthur Postle in 9.37 seconds (a fifth of a second faster than the amateur record of the time). It took 38 years before America’s Mel Patton bettered the time with a flat 9.3 seconds in 1948. His 130yds (119m) record stood until 1951.

In 1910 Donaldson defeated the 1908 Olympic champion, South African Reg Walker and the two had many tussles in Africa and England, with Donaldson usually the victor.

He had some memorable contests against Australian champion Arthur Postle who was five years his senior. While Postle was very quick over the short sprints, he could not match Donaldson over longer distances. Their contests became part of the folklore of Australian professional running.

Among his world records, Donaldson ran a particular blinder -12 seconds for 130yds at the tight Sydney Sports Ground grass track in 1911. This time stood for 40 years until Lloyd La Beach of Panama clocked 11.9 seconds in 1951. There were claims that the Sports Ground track had a 0.6m drop towards the finish line, but this possible advantage was countered by a very sharp turn. To prove the run was no fluke, he ran 12.18 seconds the following year on a rough grass track at Pontypridd in Britain. At meetings held in the north of England, Wales and Scotland, he ran for appearance money, prizes and bets.

Donaldson was the epitome of the professional elite athlete, enjoying the good life. He was a serious athlete who was respected for his dedication and talent. At the age of 32, and without training for years, Donaldson was still able to break 10 seconds for 100yds.

With matches hard to come by, Donaldson turned to track management. Although he argued that as an Australian he could not be conscripted, in 1916 he was charged with being an absentee from service and ordered to join the British Army. After seeing ‘something of the real war game’ with the 7th Manchesters at Arras, Donaldson became a physical education instructor. He made a brief return to professional running in Britain before going to the USA in 1919. Declining chances to coach, Donaldson worked for Wanamakers, a New York retailer.