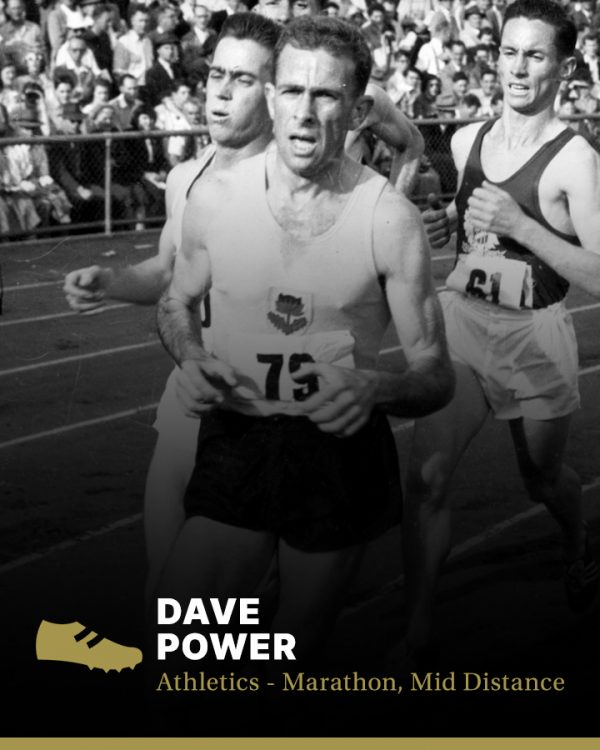 Dave Power was known on the International scene as one of the toughest competitors Australia has ever produced.

His marathon efforts in the Commonwealth Games were outstanding. At the 1958 Cardiff British Empire and Commonwealth Games, the marathon runners had to battle both heat and heavy traffic and occasional misdirection by officials. As captain of the Australian athletic team, Power won gold in the marathon and six mile events, and finished seventh in the three mile event.

At the 1960 Rome Olympics, three Soviet runners aimed to ensure a Soviet victory by adopting team tactics in the 10,000m. Zhukov having dropped a lap behind paced his teammates Bolotnikov (the eventual winner) and Desyachikov who finished 4th. However Power tried to pull away with three laps to go but couldn’t shake Bolotnikov, Desyachiikov and East German Grodotzki (2nd). Power also competed in the 5000m, finishing fifth in 13:51.8. He didn’t compete in the marathon.

At the 1962 Perth British Empire and Commonwealth Games, the runners battled very hot conditions and Power took silver in both the marathon (2:22:15.4) and the six mile (28:33.53) events.

Between 1050/52 and 1963/64, Power won a total of 10 national championships in the 3 mile, 6 mile, and cross-country events but also competed with success in the marathon.