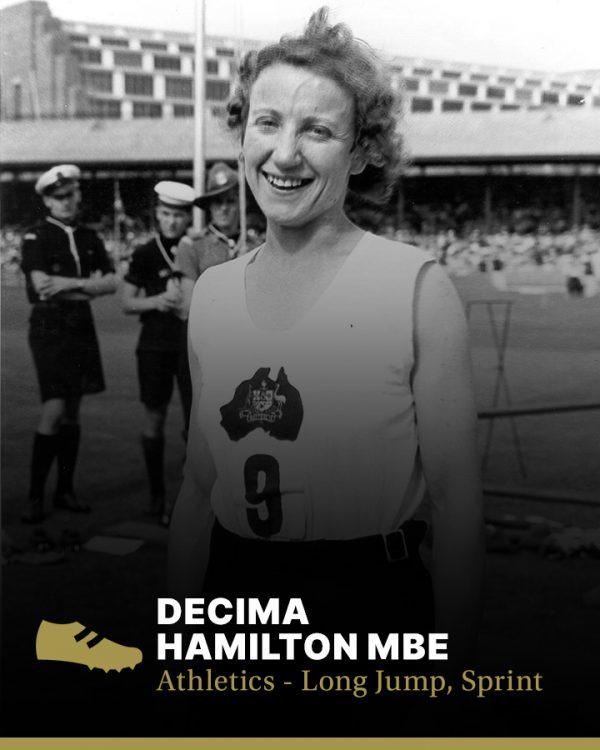 Decima Norman is the only Australian woman to ever win five gold medals at a British Empire Games (Commonwealth).

A small brunette with blue eyes, Norman had always been good at outdoor activities. She was Perth College’s champion athlete in 1923 and then became Western Australian interschools triple jump champion. As there was no organised athletics for women after they had left school, Norman concentrated on hockey. With her speed and athletic ability, she starred in a number of premiership finals and was selected in the Western Australia state hockey team in 1935. This team competed in the eastern states, and provided Norman with her first impressions of the rest of Australia.

Her first sporting love was still athletics and, even in the absence of competition in Perth, she continued training in the hope that sooner or later an opportunity to compete would be presented. Spotted by former professional athlete Frank Preston while training on her own, he offered to coach her and the two began preparing for the inaugural Western Australian amateur women’s state championships in 1932. There, she won the 100yds and the 220yds, achieving one of her aims to win a state athletics championship.

Keen to continue her development, she tried to arouse interest in forming an amateur athletics club for women in Perth, but was unsuccessful with other popular sports well established. She continued to train with Preston, and a year later she repeated her victories at the WA titles. These women’s state sprint titles were never contested again, however, so Decima had to be content to continue training and restrict her competitive events to hockey and beach sports.

Norman was unable to compete in the 1934 London British Empire Games as she was unable to register with the Women’s Amateur Athletic Association of Australia. To become a member, she needed to be registered with a women’s amateur athletics club and a member of a state association. Western Australia had neither and so her ambitions were quashed. Eventually the women aligned themselves with the West Australian men’s association and began to conduct interclub events in late 1936. The two clubs, Perth and Surf, both featured promising athletes but it was Norman who won most of the events she contested.

An the inaugural 1937 Western Australian championships, Norman won every event (75yds, 100yds, 220yds, 90yds hurdles, long jump and high jump) but her modesty made her a popular champion, even with her rivals.

On day two of the championships, Norman looked impressive winning her heat of the 100yds. In the final, she did not get away too well, but had caught the field at the half-way mark and was too strong at the finish. Weather was against good times but Norman ran 11.4 seconds to beat the Queensland champion Thelma Peake. To conclude a great day for Western Australia, the 4x110y relay team won the from strong eastern states opposition. This victory surprised everyone. These performances earned Norman a position in the Australian team for the 1938 Sydney British Empire Games. After returning to Perth for a rest over Christmas and some more rigid training in the New Year, Norman travelled by sea to Sydney for the Games.

In Norman’s first race of the Games, the 100yds, she won her heat (11.1), semi-final (11.1) and then the final in 11.1. This fine series of runs won her the first Australian gold medal of the Games. Her time was just 1/10 from the world record and to run the time three times in one day showed strength as well as speed. Norman next ran the final 110yds leg on the victorious Australian 660yds medley relay team to take her second gold medal.

The 220yds was the race that Norman and Preston had primarily been aiming for at these Games and they were looking for a fast time. They got them in the heat (24.9) and semi-final (24.5) where she smashed her personal best time and also took the Australian and Empire records. Her win in the semi-final was particularly impressive, just 1/10 of a second outside the record of Stella Walsh (later discovered to be a man).

Before the final of the 220yds, Norman had to compete in her fourth event, the broad jump (long jump). Although she had hardly competed in this event during the season, Preston was confident that she could at least win a medal and his confidence gave her some heart. When the distance for her first jump was announced (5.60m/18′ 4 3/8), she thought officials had made a mistake and would correct this later in the competition.

On the next day of competition, Norman was due to run in the 220yds final. After her excellent preliminary races, Norman and Preston set their sites on the world record, however, Norman woke in the morning with a head cold. Not at her best, she could not improve her time, but was still too good for the field, leading an Australian clean sweep of the medals with 24.7 seconds.

After the 220yds win, Norman ran the first 220yds leg in the winning Australian 660yds relay team and this gave her a record five gold medals in track and field, which has never been beaten by a female (Ian Thorpe won six gold medals at the 2002 Manchester Commonwealth Games). She was, by far, the biggest star of the Games -a first for a woman -and gave the Australian crowds something to cheer about on the track, with Australian men finding gold medals difficult to win.

Back in Perth, she had worked as a senior clerk in a Perth wholesale electrical store but on her return from Sydney, she was feted as a champion and immediately offered a column in the local press and a weekly spot on the radio. She was invited to many sporting championships and civic affairs and her photograph was regularly featured in the press.

Norman realised that she would need to make some changes if she hoped to compete in the Olympic Games, her fondest dream. A move to the eastern states was seen as a necessity if she was serious about challenging for honours in 1940. Perth did not have the opposition, or more particularly the facilities that a prospective champion would need. So, in early 1939, Norman moved to Sydney to win her way into the Australian team.

By mid 1939, it was becoming clear to all that, with developments in Europe and around the world, the 1940 Games would not be going ahead. However, Norman prepared herself for one more major competition; the 1940 national championships, to be held in Perth for the first time.

Leading up to the nationals she won the New South Wales state titles in the long jump and 90yds hurdles, equalling her national record time in the latter event, and anchoring her South Sydney relay team to victory. At the championships, she was welcomed back to Perth in fine style and she was given the honour of reading the oath of amateurism in the opening ceremony. Norman won the long jump and set an Australian record in the 90yds hurdles before assisting the NSW team to win the relay, also setting an Australian record.

After the 1940 championships, there is no further record of Norman competing in athletics. She remained living in Sydney and when she passed away in 1983, she was still the most successful female athlete to compete in a Commonwealth Games and one of the most important Australian athletes of all time.

She was made a Member of the Order of the British Empire in 1982 for her services to sport, in particular athletics.