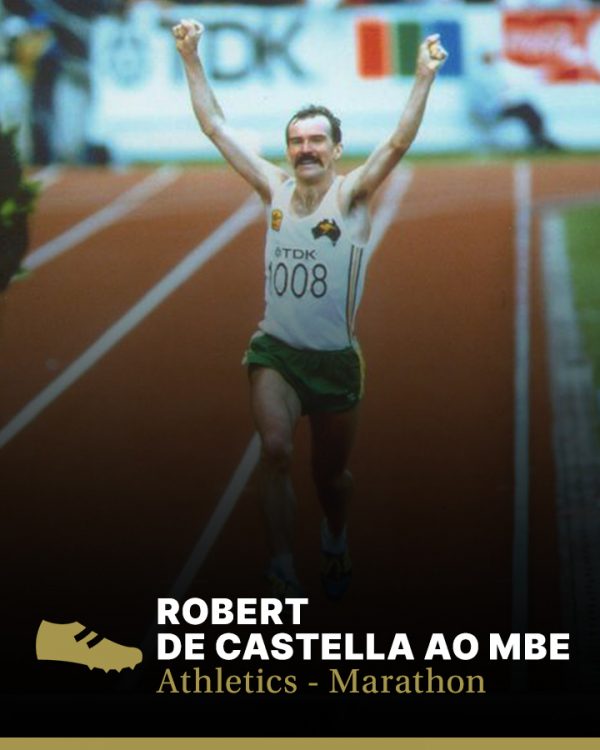 Robert de Castella AO MBE was inducted into the Sport Australia Hall of Fame in 1985 as an Athlete Member for his contribution to the sport of athletics.

In 1980, ‘Deeks’, as he would become affectionately known to the world, made his Olympic debut in Moscow, where he finished 10th in the marathon.

In 1981, he won his first major marathon when he won the Fukuoka marathon in Japan. Regarded as the unofficial world title, De Castella triumphed in a remarkable 2 hours, 8 minutes and 18 seconds – a remarkable five seconds off the world best time. There was more to come. De Castella looked invincible in 1983, and this was vindicated with his number one ranking in the world marathon list. He won the Rotterdam Marathon classic in April, and the World Championship marathon in Helsinki four months later. He also set the world record for the 15km road run.

De Castella was unable to sustain his winning form at the 1984 Los Angeles Olympics, and finished a gallant 5th in trying conditions, having been the pre-race favourite. At the 1988 Seoul Olympics, he finished 8th. He repeated his Rotterdam Marathon success in 1991 before competing in the 1992 Barcelona Olympics, ultimately retiring from marathon running after the 1993 London Marathon.

With his four Olympics appearances, De Castella became the only Australian runner to ever place in the top ten of the marathon at three successive Olympics. In 1983, he was honoured as Australian of the Year.

Director of the Australian Institute of Sport during the 1990s, and a popular commentator to this day, De Castella was recognised for his achievements in athletics when he was made a Member of the Order of the British Empire (MBE) in 1982.

Robert was appointed an Officer of the Order of Australia (AO) on January 26th 2014 for distinguished service to the community through programs promoting children’s health and fitness, as a supporter and mentor of Indigenous men and women, and to marathon running.