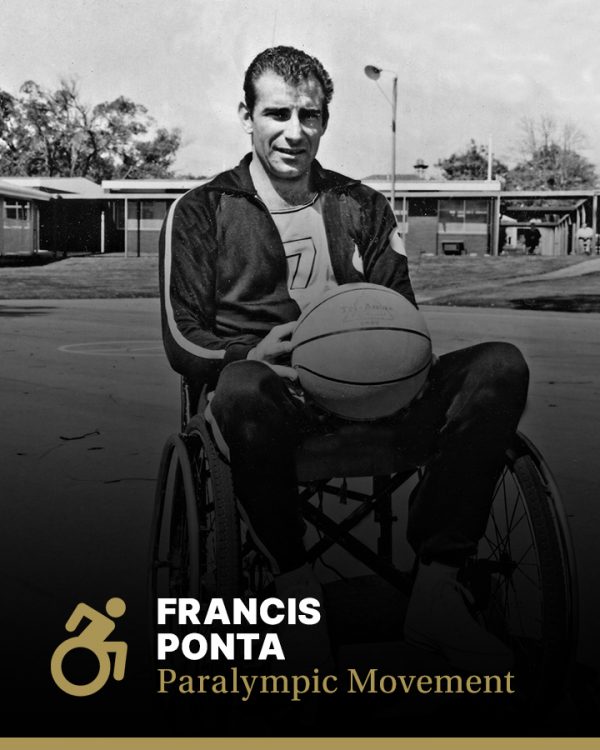 Frank Ponta was Inducted into The Sport Australia Hall of Fame in 2017 as both an Athlete and General Member for his contribution to Paralympic Sport.

Frank Ponta is widely known as a pioneer of disability sport, and is regarded as one of the country’s most talented and versatile Paralympians who competed fiercely in a number of sports, particularly wheelchair basketball. In 1960, he won a silver medal in precision javelin and foil novice fencing at the first ever Paralympics in Rome. Four years later he won gold in Tokyo in the 25m freestyle and then a bronze in 1968 for the backstroke. In total, he competed in five Paralympic Games across five sports in his career. His coaching career was equally impressive, guiding multiple athletes to Paralympic medals and he was consistently an influential figure in Australian wheelchair sports.

Ponta was born in Perth and injured his back in a diving accident at the age of 15, where a tumour formed that was later surgically removed leaving him a paraplegic.

While completing his rehabilitation program, Ponta worked closely with John Johnston, a pioneer of wheelchair sport in Australia, who coached him in a variety of sports including wheelchair basketball.

He would go on to compete competitively in athletics, swimming and fencing before becoming a member of the first national wheelchair basketball team for Australia, which was formed in 1956.

It was the following year where Ponta really made his mark on the world stage competing in Australia’s first sports team for athletics with a disability at the Mandeville Games, the precursor to the Paralympics. He won gold in the team sabre and silver in the shot put, javelin, and individual sabre -while also being captain/coach of the wheelchair basketball team.

In 1960, Ponta took part in the first ever Paralympic Games, which were held in Rome, winning a silver medal in the precision javelin and foil novice fencing before competing in wheelchair basketball at the Commonwealth Paraplegic Games held in Perth two years later.

At the 1964 Paralympics in Tokyo he won gold in the class two 25m freestyle supine event, four years before claiming bronze in the men’s 25m backstroke at the Games in Tel Aviv, Israel.

Ponta made perhaps an even greater contribution to developing disability sport in Australia through coaching and administrative roles once his own athletic career ended. He was a driving force behind the wheelchair sports movement in his home state of Western Australia.